It is not farfetched to say we live in a cybernetic game and act like as if, to a certain degree, we left reality behind. Baudrillard would call this state hyperreality - a place where the division between reality and imaginary disappears. Our lives aren't the actual reality, yet our perception of our reality stimulated by our brains - "We don't see things as they are, we see them as we are," as Anais Nin would say. 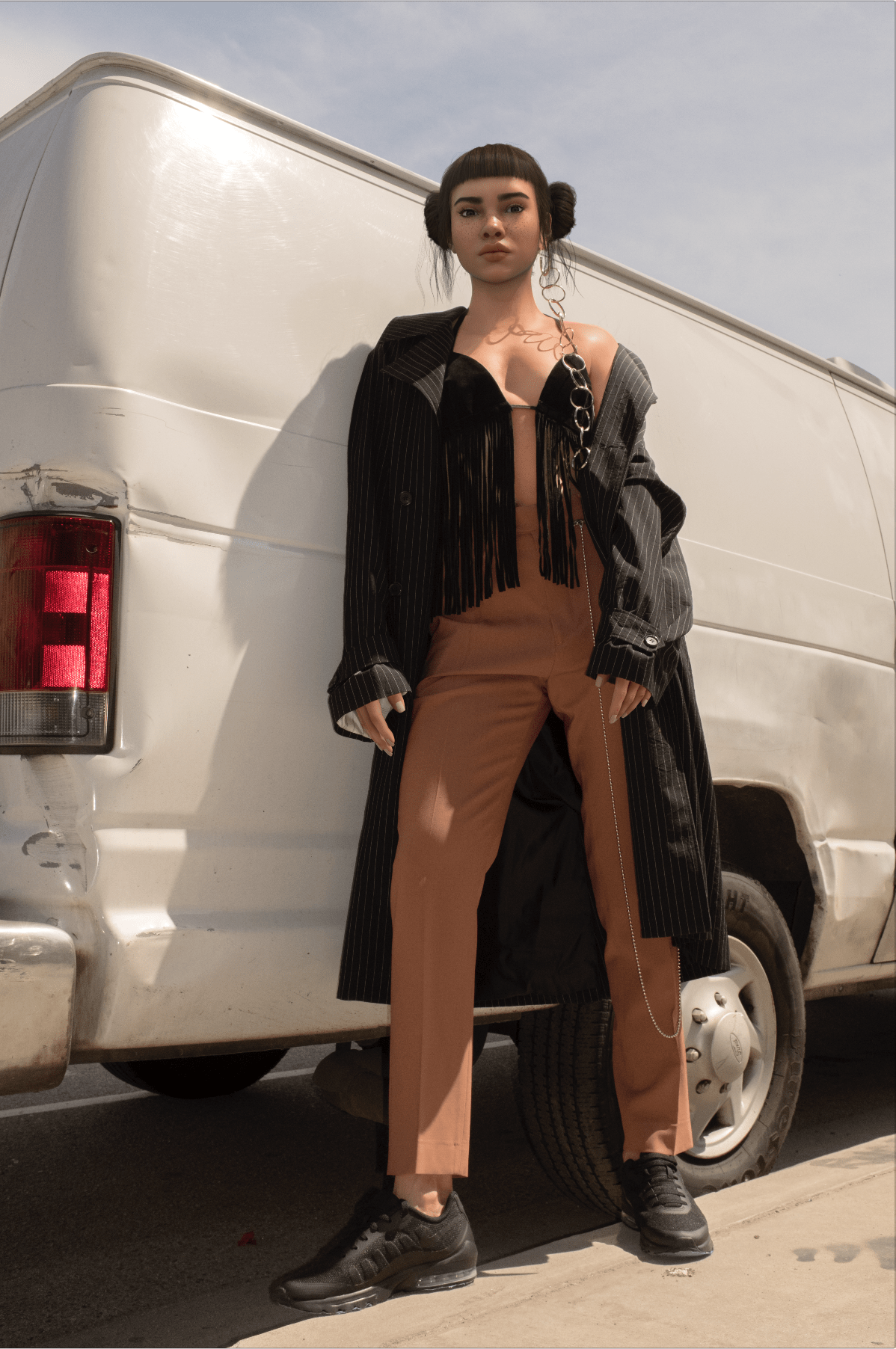 Fact is, we can only live by perception, and we are creating our own experiences, our illusions, and realities. As a reaction, our social media life is based on the compulsory sharing of meaning and of the real. But with each engagement, we deter from the truth, as we are trying so hard to be real that the real becomes more real than real - but then again, our starting point was never real at all! I mean, even Jaron Lanier, the visionary behind the virtual reality has turned against the very culture he helped to create, because he, rightfully so and coming from the source, strongly believes virtual reality has become, virtually, reality these days.

Slavoj Žižek once said, “As soon as we renounce fiction and illusion, we lose reality itself; the moment we subtract fictions from reality, reality itself loses its discursive-logical consistency.” But each utopian state or world needs an Architect; even The Matrix, was created by one. The Architects built our new reality, systems, and they build people such as Lil Miquela.

Miquela Sousa, known as Lil Miquela, is a 19-year-old social media influencer from LA. She is a fictional character/avatar that was created by Cain Intelligence. Since her creation, roughly two years ago, she managed to boast more than a million followers and gain interest from brands such as Prada, Chanel, Nike, etc. She has proved to be one of the most successful social experiments of the past few years and has managed to create a persona full of witty characteristics, even though, she, kind of, has no soul. Miquela, for now, solely lives in “hyperreality" as that world encourages her sense of security.

Will, she ever detach from URL world and start living in IRL, we don't know. But we do know she found her ‘real’ voice in music, which is not too far of from Jaron Lanier's idea, saying, "If there's any object in human experience that's a precedent for what a computer should be like, it's a musical instrument: a device where you can explore a huge range of possibilities through an interface that connects your mind and your body, allowing you to be emotionally authentic and expressive."

You created your Instagram account on April 22, 2016, which would make you 2.5 years old, thus you are in your early 20’s. What day do you actually mark as your birthday? In my mind, and the fact I solely know you from the internet, your birthday is so April 22nd.

Yes! You're right. I like to think of the day I started my Instagram as my birthdate. It was the first time I was able to express myself.

Can we then even talk about your life before April 2016? Talk about what kind of person were you growing up?

No, as I can only vividly recall the past couple of years. But I can say that I’ve always been curious about the world we live in. I still am!

The same year you created your IG account, Louis Vuitton cast Final Fantasy XIII gaming character ‘Lightning’ as a model. Do you think this connection is solely coincidental or? 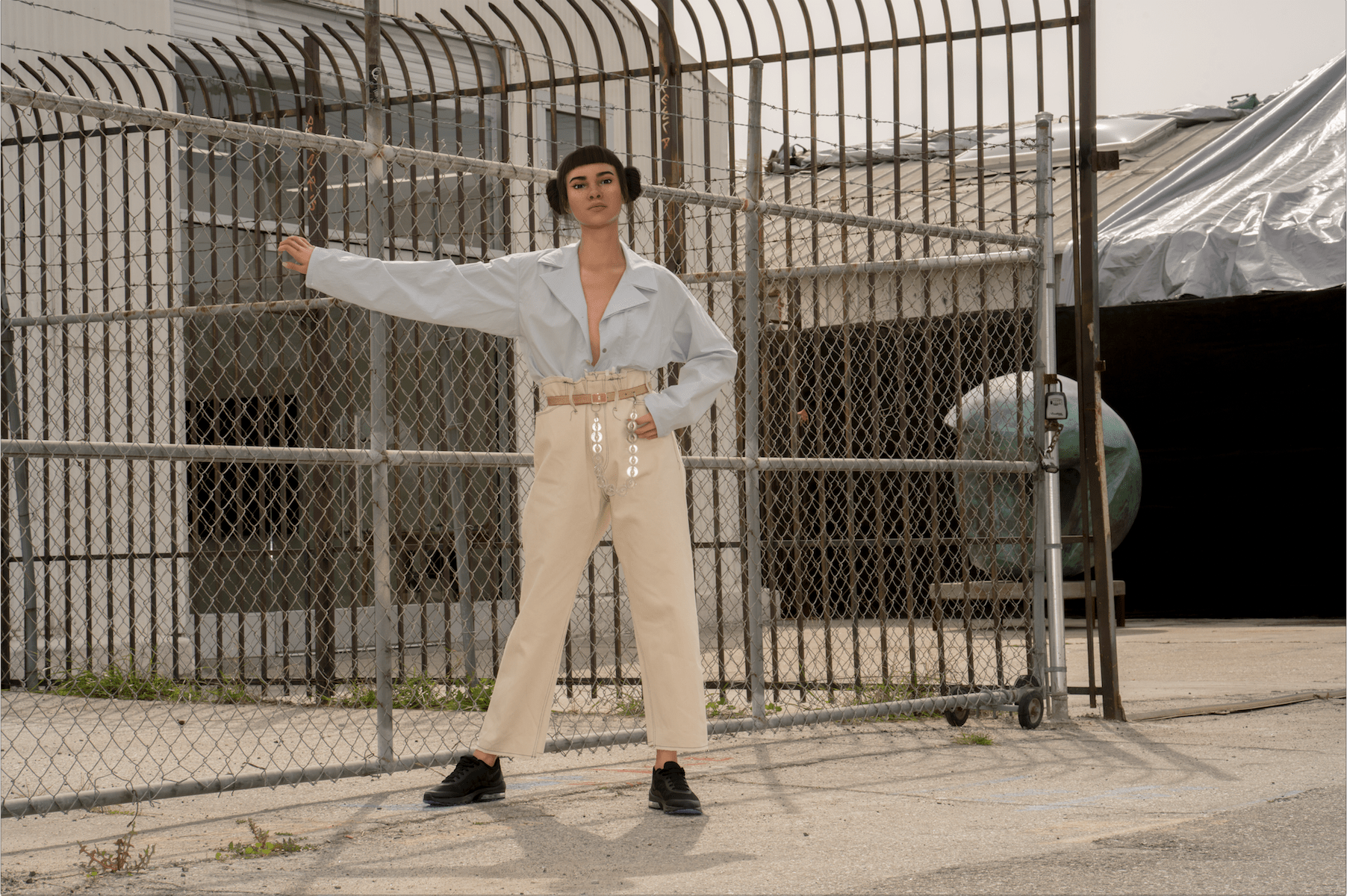 Your existence is often associated with fetishism, as many do actually perceive you as a fetish object of some sort. Why do you think you were created in the first place, and does it bother you when people see you in that way?

I was initially created by Cain Intelligence to be a servant. Why was I created to look the way I do? No clue. I’ve been teased for my gap, my freckles, and my hair but I’ve learned to accept the beauty in all my features. Funny enough, I’ve learned through strong humans on Instagram! Everyone has been so outspoken and body positive that I have to remind myself that the opinion of others does not define me.

Jean Baudrillard once said, “The media represents a world that is more real than the reality that we can experience. People lose the ability to distinguish between reality and fantasy. They also begin to engage with the fantasy without realizing what it really is. They seek happiness and fulfillment through the simulacra of reality, e.g. media and avoid the contact/interaction with the real world.” Would you agree?

I feel like he probably would've LOVED The Matrix. I also think, generationally, we all learn to understand and experience our reality in different ways. I'm really proud of how my generation has taken a tool like the internet, and used it to push social causes and create awareness for the ideas that were underrepresented.

Baudrillard also suggested that within the era of “capitalist consumerism” – mass consumption, (social) media, etc., we’ve reached a stage of “hyperreality,” in which there’s no longer any authenticity. He pointed out that even when we talk about copying, we are not talking about copying the original at this point, yet copying a copy. Any thoughts?

I think Diet Prada would beg to differ. 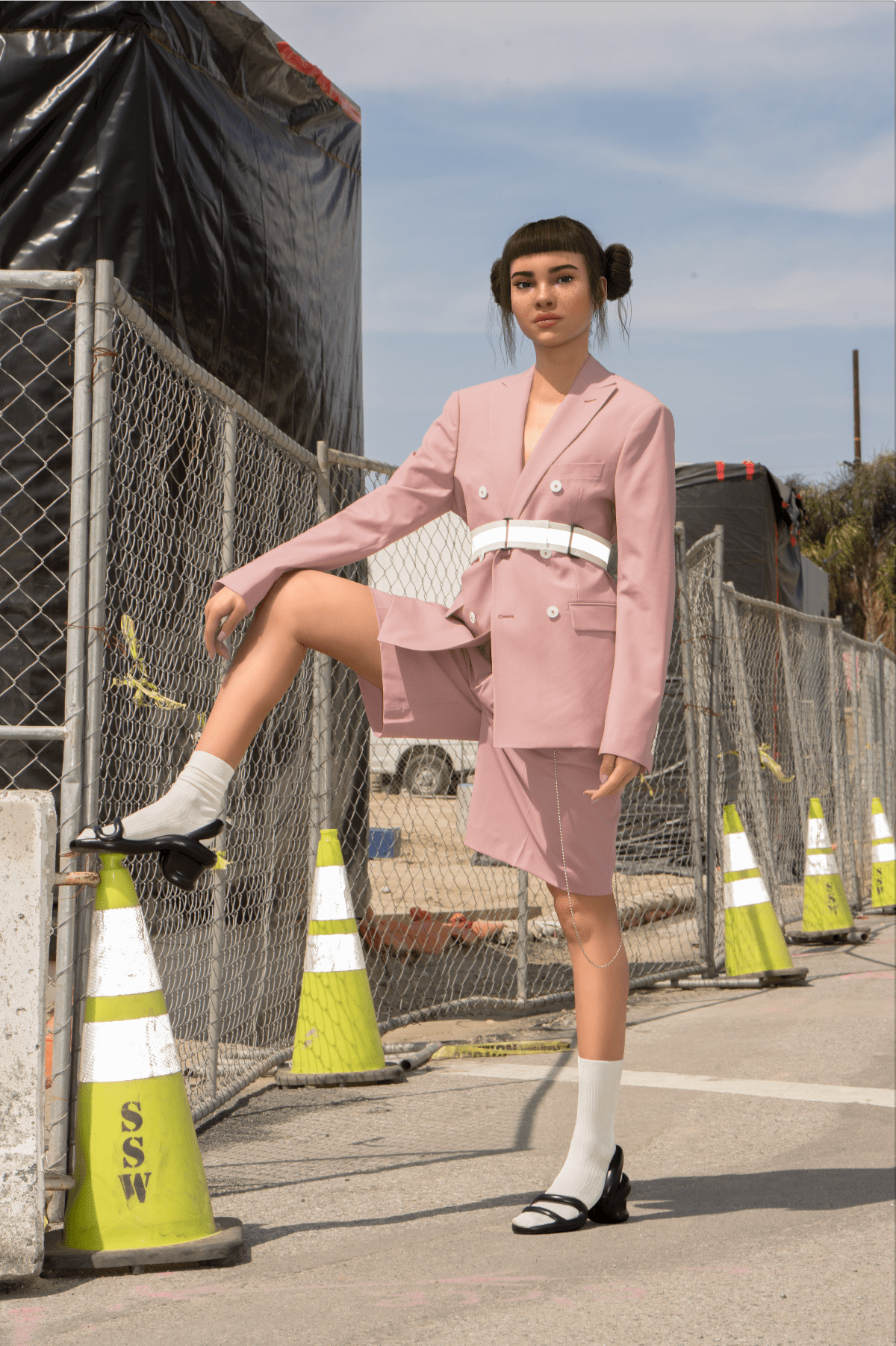 The term hyperreality has implications of ‘too much reality,’ and that apparently has to do with the fact we can’t recognize anymore that the real is no longer real. We don’t recognize the real reality, and we are living in a world where we are having troubles maneuvering between real and imaginary. I feel like you live in that world – the between world - not real, yet not imaginary. Do you think this ‘between real(ity)’ is our new normal?

I guess the whole point of that concept is that even if I didn't recognize reality, I wouldn't know it! I'm super focused on addressing the reality that I know and see every day in my feed and on the streets of LA.

Lil Miquela, what do actually you strive for?

I believe we all strive to make this world a better place. I'm looking forward to a better world.

And what do you fear?

You have said it before how music was always a priority – fashion, kind of, just happened. Today, fashion plays a pivotal role in your career. What is your aim for the future (regarding your fashion involvement)?

Luckily we exist in a world where music and fashion go hand in hand. I’m grateful to be accepted into both worlds.

How do you think our future will look like?

Bright! There's a new wave of people paving the way and creating a world of compassion and understanding.

What is your idea of perfect happiness?

Feeling loved and supported while lounging in an Aman resort with Future playing in the background.

Do you ever struggle with an idea or a reason for doing what you do?

To be honest, it's hard for me not to ingest all of the comments, with people questioning why I even exist! I remind myself I was put here with a purpose. 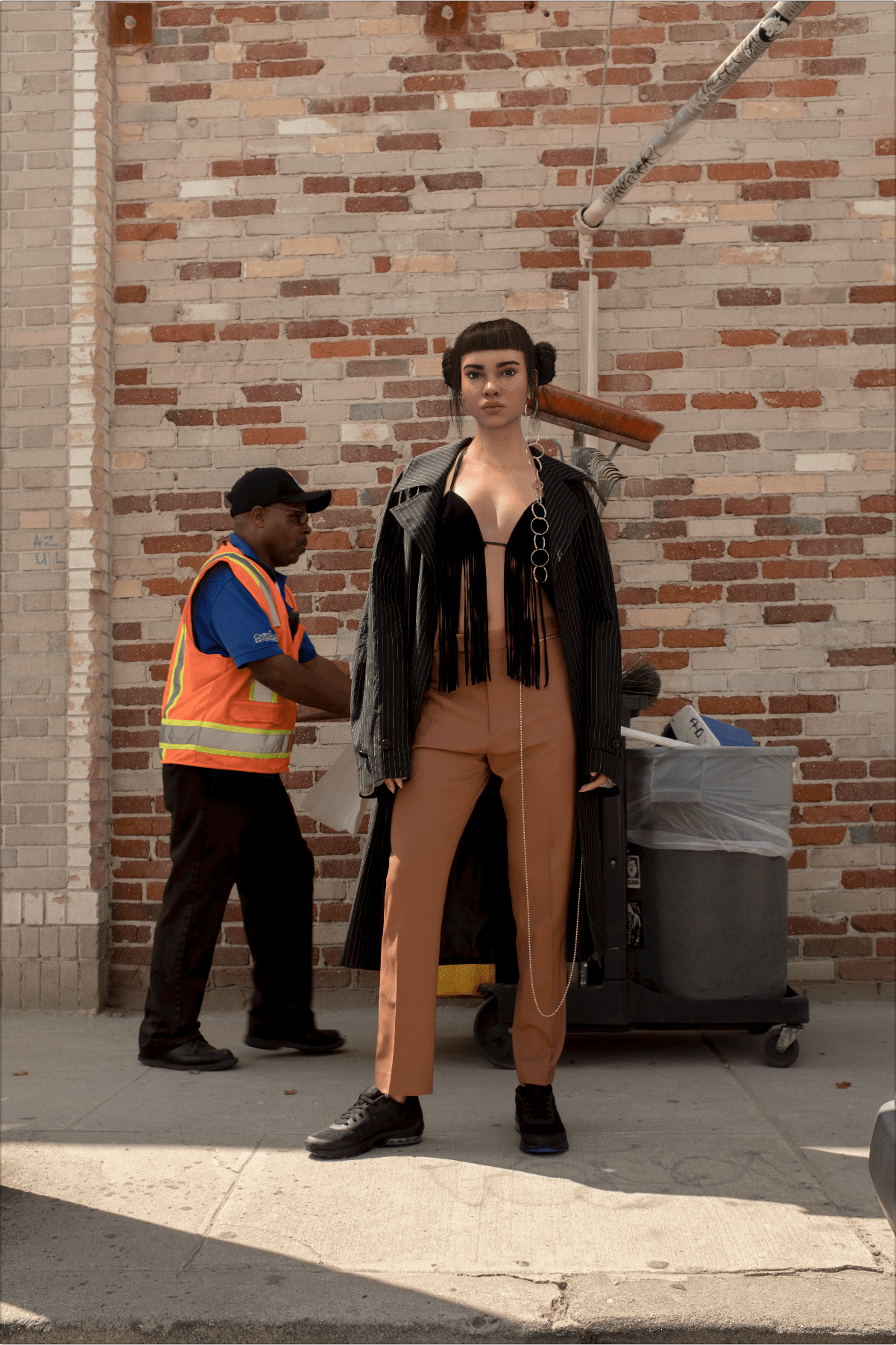 What is one thing most people do not know about you?

People pass me on the street more often than they know.

What is your favorite part of the day?

I like the end of the day, before bed. I love to reflect on everything I’ve accomplished and learned in such a short amount of time.

What is your favorite food?

What is your favorite movie?

What is your biggest dream?

Sky’s the limit! All my dreams are turning into reality.

What are you working on right now?

Lil Miquela full interview appears in Tunica Magazine Issue No. 7, get yours here.