BB: You often work with collage of printed items you personally produce. Can you talk about where the patterns from the screen printed source material comes from?

CM: I grew up in a very small ski-bum town in Alaska. The local school was very modern and staffed with forward thinking teachers, but there was no high school, which posed a problem for my family in the fall of 1990. Moving to a more populated area wasn’t really a consideration, so I was sent to boarding school along with a going away gift – a 20 pound Macintosh SE in a padded burgundy carrying case. It was a luxury item at the time. My rich uncle bought it for me. It was as though I was being sent to space. I spent a lot of time on that computer – not because I liked or like computers – I hate them actually – but I fell in love with writing and drawing as parallel creative activities using Mac Write, and Mac Paint, which was a companion program. Mac Paint was very unique at the time because it was the only program of its kind that allowed for cutting and pasting between programs, and synthesizing images and text became a very natural way of writing/making/thinking for me. Mac Paint allowed for infinite cutting, pasting, layering, filling, which I think conditioned me to later pursue collage as a ceaseless, primarily iterative activity. 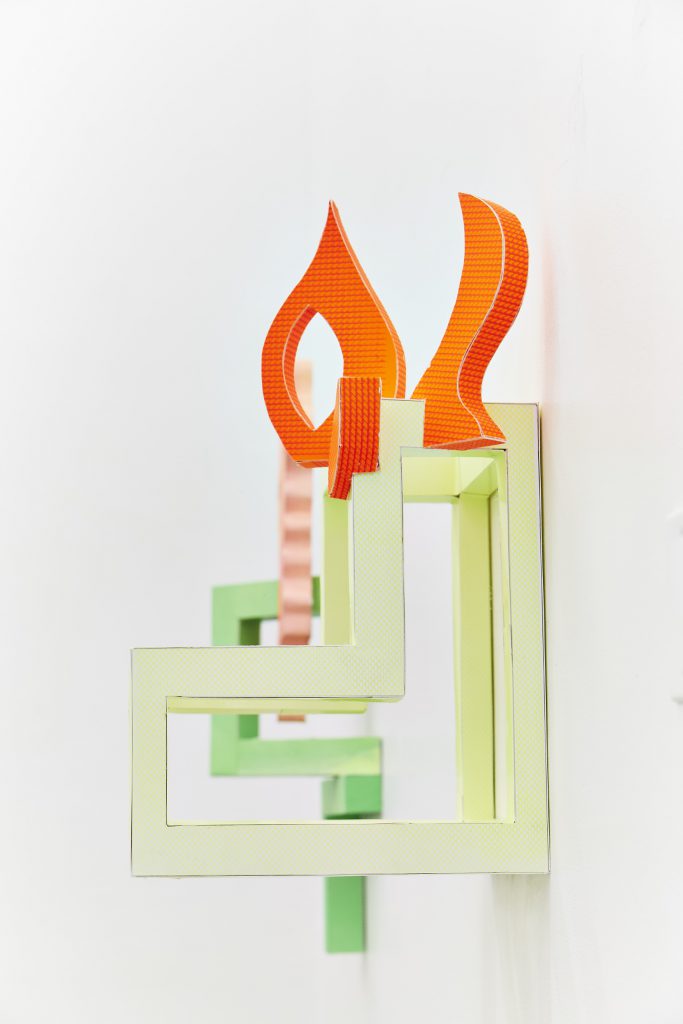 The graphic patterns I use in the current work are vectorized versions of Mac Paint’s stock fill patterns, although I didn’t begin using them with any nostalgia for my early Macintosh experience. I rediscovered the patterns through learning about Susan Kare’s important and influential design work for Macintosh in the 1980s which until very recently was relatively under-acknowledged - notable that a female designer is singularly responsible for the visualization of interaction design as we know it today – her visual lexicon is ubiquitous. The patterns themselves are lodged in the zeitgeist of mediated experience for me, not to mention they are highly legible, scalable, and transferrable from a media point of view. Incorporating the patterns signified several things for me – exported relationship to media, connection to history or as I think of it “time-travel”, re-appropriation of the idea of cut-and-paste as a tactile, analog activity, and a kind of sabotage of the futurism of the digital through the clumsy level of craft in my silkscreen process. Essentially the patterns for me signal cut-copy-paste-fill as a process, an activity that doesn’t index a definitive beginning or end.
The silkscreen process itself involves the use of high-gloss fluorescent enamel ink on polyester coated poster paper. I’ve been using poly-coated poster paper since 2006, initially as a found material as I was scavenging and reusing Colby posters from the streets of Los Angeles as a collage material, and currently with total control over the process as I am printing the material myself. As it turns out, my too-thick collage material is a perfect paper-relief sculpture material. 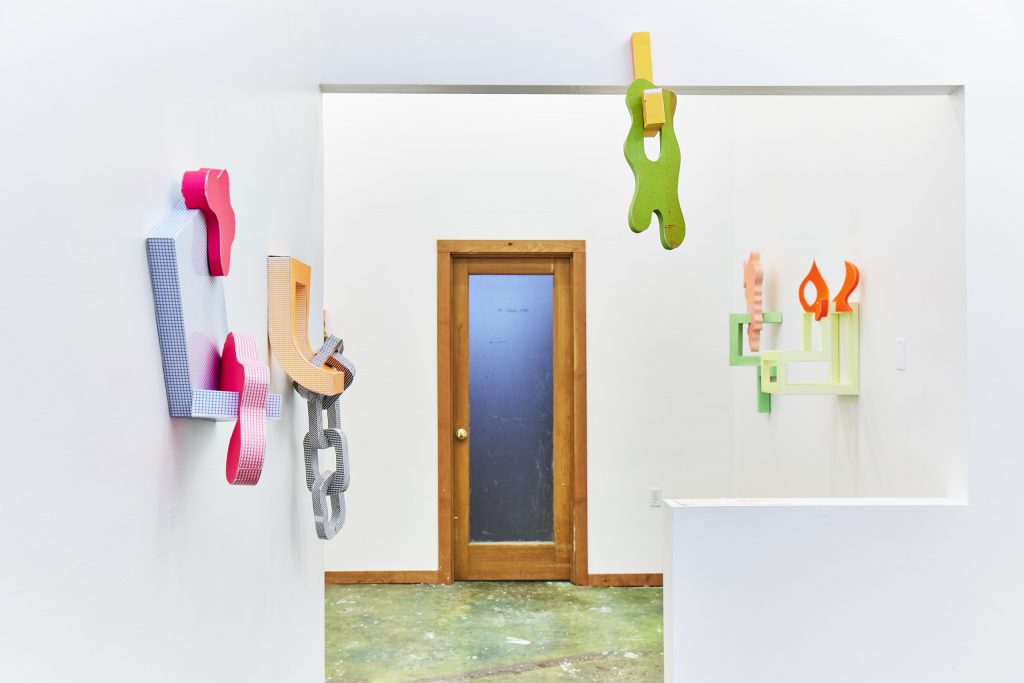 BB: You’re transforming simple line drawings into sculptures, and paper cut outs into drawings. What is the conversation between 2-D and 3-D in these works?

CM: I ask my self that question a lot! Print media is at the heart of everything I do, and allows for a kind of synthesis of ideas and processes that gives me the elasticity I need to move projects forward in the studio. The act of printing, specifically silkscreen and RISO requires a breakdown, or deconstruction, of ideas in a way that maybe mirrors my way of thinking. Recently I have taken the position that certain 2D problems are best solved with 3D solutions and vice-versa, which is to say that the interplay between 2D and 3D in my current paper relief works is continually overlapping. I really have an aversion to fixed definitions of media, and Ex-Pictures is a good example of a group of works that attempts an open discourse with regard to process and outcome – the beginning and end are intentionally cross-referenced in the works – sharpie drawings, collages, RISO prints, and relief sculptures, all juggling the same motifs back and forth, sometimes parallel in their content, sometimes intersecting in their process, etc. Interestingly I think that relief or “bas relief”/“low relief”/“high-relief”” occupies a productive spatial middle ground for me – and additionally references an essential connection to architecture in my work, as well as a purposeful skewing of spatial rendering and perception. The paper relief sculptures are intentionally scaled to imitate architectural models, not to mention their paper-ness references the provisional quality of many architectural models – which is to say they are very apparently hand assembled. Additionally, and this is important to me, “relief” is historically situated as at once a part of and also in addition to architecture, decorative but also integral. From the front, relief is legible, but from the side makes no sense at all, but is still visible as something, at least traditionally – this collapsibility of space is useful for me and it is exactly where I want to set up camp with my paper relief pieces. 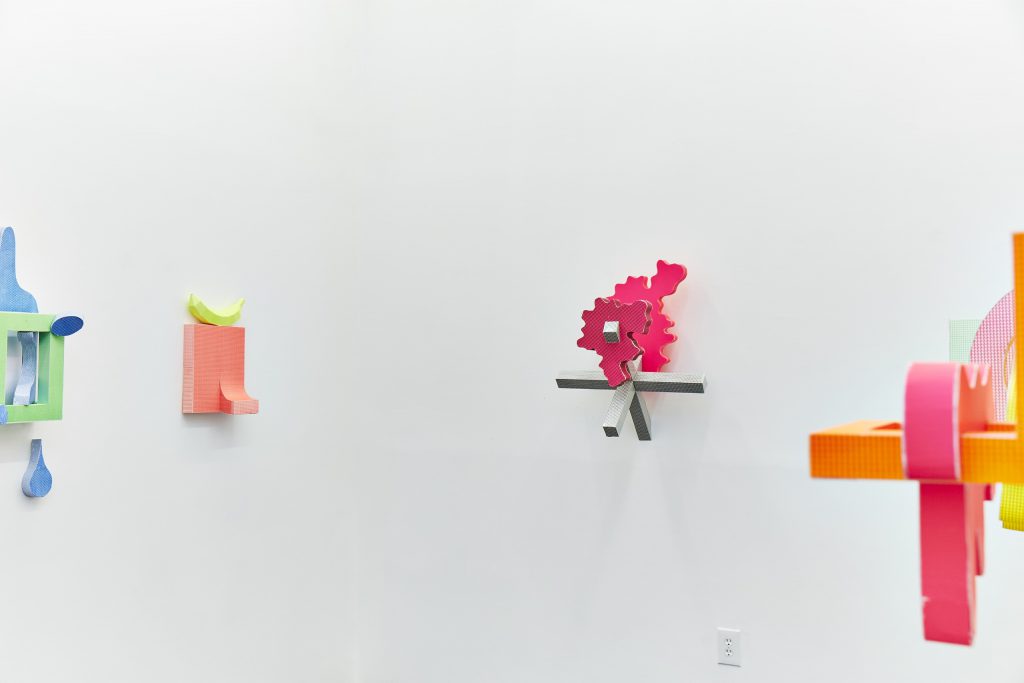 BB: How did you decide on where these sculptures live?

CM: I’m currently the Director of Graduate Studies for the Department of Art at the University of Oregon, and as a result I have become very attuned as to how my students are experiencing art, especially as we are in a very isolated environment culturally speaking. FISK’s presence in Portland has been an extremely vibrant and surprising one in its prolific programming, its presentation of work by non-regional artists, and its project-ness, which has to do with its value as a neither a purely-commercial enterprise, nor an institutionally supported initiative. I guess I’m a FISK anomaly as a transplanted regional artist, although having lived in Los Angeles for 15 years prior I still consider it to be my creative home. Ex-Pictures occurring at FISK is ideal for me for several reasons – for one thing it is exactly the kind of ecstatic, ambitious, temporary project I feel compelled to support. Secondly, FISK is constellating a new collaborative community of artists and designers as a result of a highly socially engaged approach to exhibition programming – and that is important. 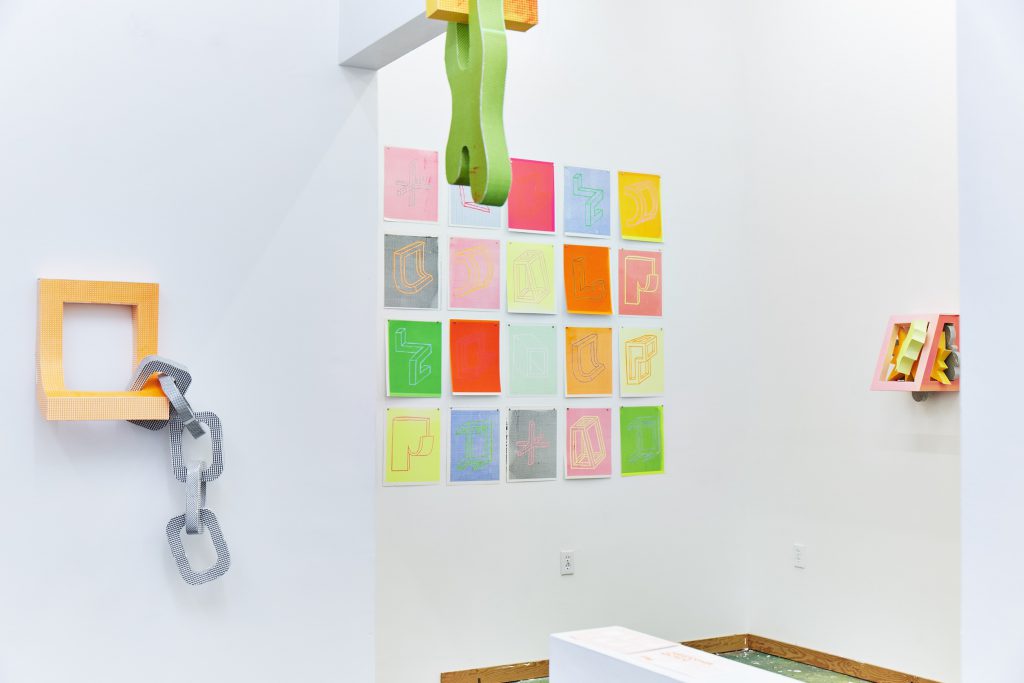 BB: What is your relationship with 3-D?

CM: I think of sculpture in a very basic way. In a 1961 BBC documentary Barbara Hepworth talks at length about three essential scales of sculpture – handheld, human-sized “you can wrap your arms around it” and anything beyond human-scale – and I would include architecture in the last category. For one thing, I think there is always a correlation between 2D space and desired physical space, in that art in general presents ideas that are critical or at least reflective of culture – projective - and aspire to effect our experience “in the world”, directly or indirectly. I’m old fashioned in that I feel that art should promise resistance to social repression through symbolic representation, which is to say it should be pleasurable. For Ex-Pictures the relationship to 3D space is a combative one, each piece consisting of a framework being acted upon by a disruptive element. Simultaneous to this are more apparent, purely visual formal qualities – color, scale, pattern, composition – all of which have to work first and foremost. I remember Mike Kelley standing in my studio in grad school telling me that every time he stands in front of a work he asks himself, “Is it visually pleasing?” That is a first and last consideration for me – everything else is embedded in the formal and material and spatial relationships.

BB: Now that we’ve discussed the influence behind the patterns of the base collage materials, what is the influence in the structure of the sculptures in this series of works?

CM: The initial plan was to create a series of framework structures that reference picture space through very basic geometric articulation. Some structures are fragments, some are extrusions, some are more oblique or abstracted, but the common thread between them is that they are frameworks, and primarily open for support of or interaction by secondary elements. Two immediate influences are Bernard Tschumi's Parc de la Villette, and Sol Lewitt’s Incomplete Open Cubes. In a way both have parallel analytic approaches to form and variation. For Ex-Pictures I began and finished all 12 of the relief works as a group, each framework unique and each intended to support a specific, idiosyncratic interruptive element. I am interested in the way a framework structure can index scalability, and that openness suggests a programmatic potential or capacity. I would say on the whole that the pieces acknowledge post-modern design and architectural influence through a deconstruction of traditional relationships between inside and outside, presence and absence, etc. Prior to UO I was a Visual Studies instructor at SCI-Arc. I was constantly enthralled by the high turnover and school-wide emphasis on site models - especially the highly speculative and essentially, un-buildable ones. Models sustain possibility in an inimitable way. 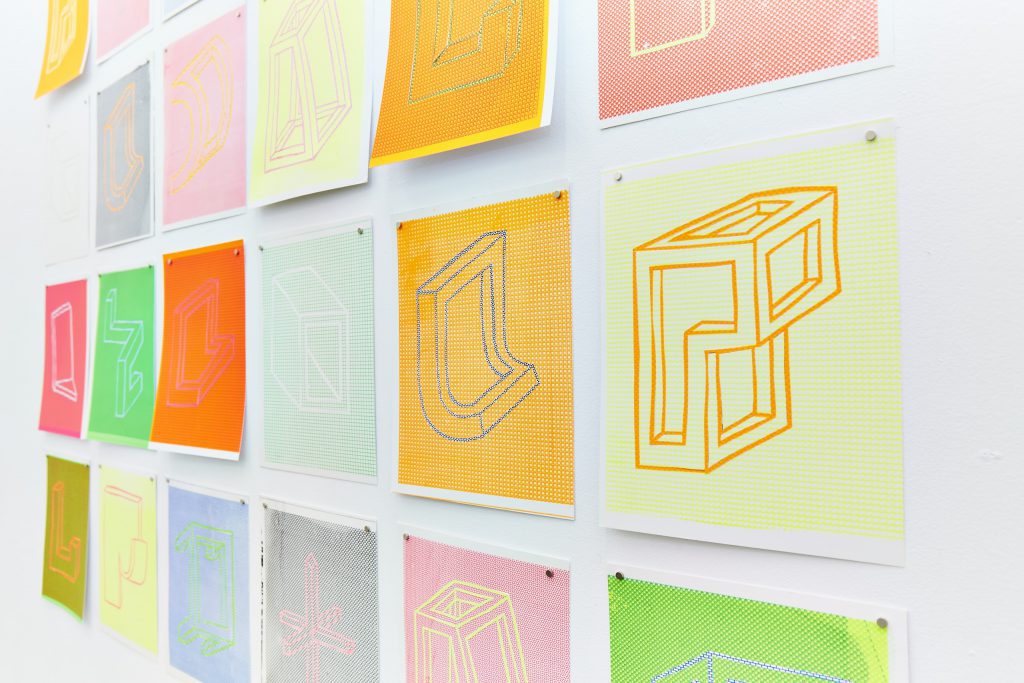 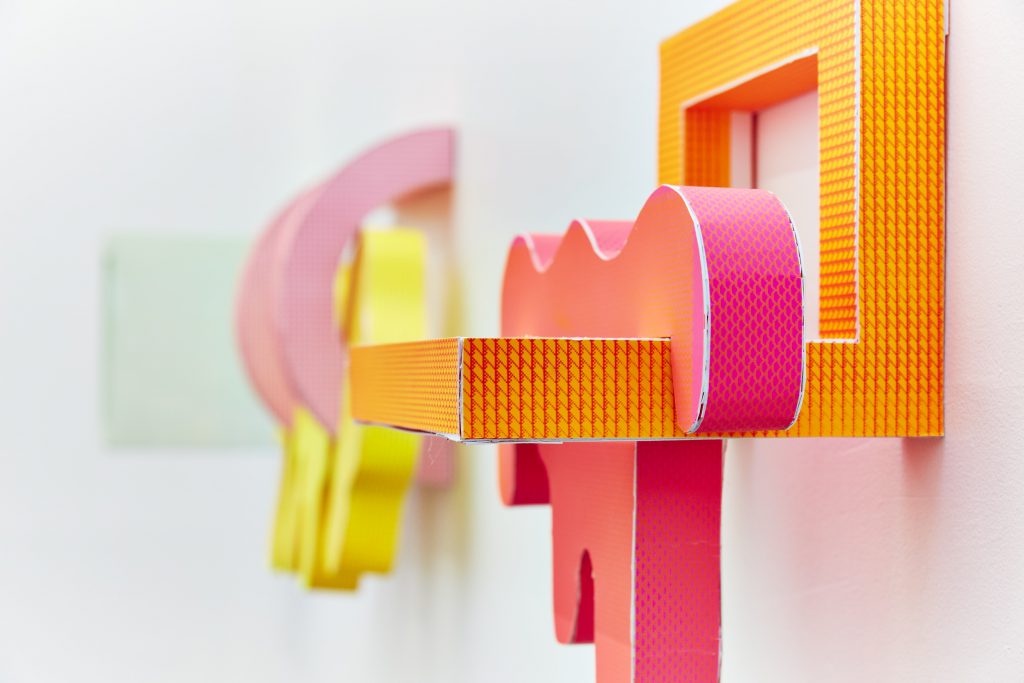 BB: Do you still consider these works collages?

CM: I’m not sure what’s at stake in the difference – strictly speaking my collages may not even be collages as I don’t use glue - only tape - which is a process I arrived at through trying draw out the collage process and avoid making unchangeable decisions. I am afflicted by a fear of decisions – Jan Tumlir has accused me of suffering from Dialectical Anxiety, and prescribed that I read more Bergson, less Hegel. I guess my collages are “bande”-ages, to be French about it. The relief works are somewhat similar in that they consist of a fixed frame and somewhat interchangeable “parts”, and they have an elasticity of process that is similar to the collages. I’m very confident starting pieces, but the process evolves haltingly as I finish pieces. It all feels the same to me, especially now as I’m using the exact same materials for the collages and the sculptures – that has been a liberating evolution in the studio.