“The creative process has a high degree of useful unproductiveness that has to be protected in some way.” “Mistakes are simply based on wrong expectations.” “If we want to work with society, the best thing is to do it with what that society discarded: its rubbish.” “Somewhere between attention and distraction.” “To transfer all the underlined passages in books to a .doc file.”

The last two pages of Labor are dedicated to “notes”: sentences or ideas taken from the articles of the magazine. These fragments work individually and are isolated from their original contexts. Those two pages sum up one of the main intentions of Labor: to try to be a tool for the daily work of people from any discipline, by taking ideas and inspiration from it. 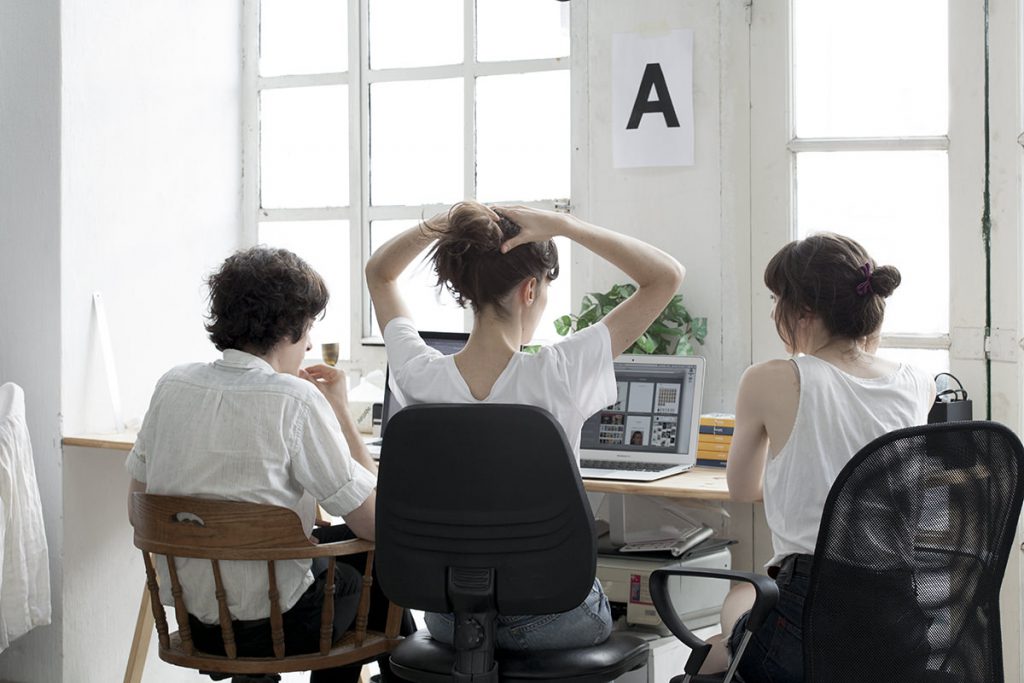 CC: We use Labor as a tool ourselves. For example, in the first issue, Malcolm Hearn (an American film editor) explains in his article how he used lots of cards displayed on the floor in his house to build the structure of a documentary. In our second issue, we used this methodology to decide the order of the articles.

DB: We cut paper strips of different sizes according to the length of each article and moved them around the table testing different combinations. This way we could work on the editing of the magazine in a visual and tangible way.

AS: I think that the “notes” section was the last piece needed to define the magazine’s concept. It’s easy to say it now, but I'm not sure how aware of it we were at that time.

DB: In the beginning, we had some ideas about how our magazine was going to be. We wanted to feature artists (and people from other disciplines too), but not in the way they are shown in most magazines. We didn’t want to print the same images you can find online in an endless list of webs and blogs. We realized that we didn’t want to show finished artworks or projects. Following this idea, we slowly discovered that our magazine could be about processes, about everything that goes before the finished work. People talking about themselves, about their own everyday work. That’s why we called it Labor, which we also liked because it is bilingual, as the magazine is.

But we had no clue about how to really start making the magazine. After struggling for some weeks doing things that led nowhere, we finally chose a different way to begin: making a short film to explain the project to other people (and to ourselves). We spent 6 months making this video, and in the process of making it, we ended up understanding what Labor was about.

Labor is an arts and culture publication based in Buenos Aires that focuses on work processes, everything that happens on the path between the birth of an idea and the finished work. In its nearly 200 pages, it captures different processes, from the day to day life of a mathematician to the reflections of a piano tuner, from the details of building a sound studio in the living room of a house to a conversation between an industrial designer and a photographer about marble. Collaborators from different nationalities and disciplines write a first-person account about some aspect of their work.

IK: From the start, we tried to have the collaborators write about their work process in the first person. This becomes an intimate content specifically generated for Labor.

AS: We wanted collaborators to adapt - so to speak - their work to the magazine. We try to get people out of their daily activities and to think about their work process. This way people who are not used to writing do it for the magazine, and therefore, the texts we publish give different perspectives. There is a shift there that enriches the magazine’s content.

CC: The first article we received was from Pablo Polosecki, an Argentine neuroscience researcher based in New York. Contrary to what you might expect from an article written by a scientist, we received a very personal and warm text about vocation and how difficult it is sometimes to keep working with enthusiasm in very hard conditions, for example, living in a foreign country and working in an atmosphere of intense academic pressure.

IK: The guideline of writing about work process might seem too narrow at first, but we realized that it could be approached in many different ways. Although Labor has a precise central concept, heterogeneity is one of the magazine’s key principles in almost all of its aspects: disciplines covered, the format and contents of articles (texts which can be abstract and general or descriptive and thorough, photos, documents, scans, illustrations), and ways to talk about process. Each collaborator has the freedom to propose how they want their article to be.

DB: For the second issue of Labor, we contacted Apparatu, a ceramics studio from Barcelona. They wanted to participate by making a photo novel illustrating a day's work in their workshop. They did it and designed it themselves, along with their friends of Bendita Gloria (a great graphic design studio also from Barcelona). We never ever would have thought to include a photo novel in Labor.

We meticulously design each page of the magazine. But in this case, the article arrived already finished: seven pages with a completely different design to the rest of the magazine. This was something new and challenging for us, and it wasn’t easy to accept at first. But ultimately, I think this intrusion enriched the magazine by making it more unpredictable.

CC: In fact, at that point we questioned the control boundaries in our editing activities. There are some articles that are delivered to us almost finished and ready to be printed, but there are others in which we have much more work to do, and we work closely with the collaborators. An example of this process was with Hsuan-Li, a Taiwanese artist living in Buenos Aires. He couldn't write well either in Spanish or English. So we decided to talk with him and record the conversation. This conversation was in a kind of precarious English and lasted four hours. We edited the material afterwards and transformed it into a text trying to preserve the spontaneity of his words.

AS: Anyway, this methodology (the interview) is the one we use least, and we also rarely receive articles that are ready to be printed as they are. In most cases, the work includes a prolonged exchange of emails. We always play with the idea of publishing them because sometimes this correspondence reveals an aspect of this person’s process in a very raw and natural way.

My house is in Martínez. Unfortunately, and until we get our own building, the library is scattered around various homes, same as documents, paintings, etc. Therefore, we don’t have a central office, but rather what we do is as everything in the Foundation, a little bit each of us.

Besides that, my office is partially taken, half turned into one of my daughter’s bedroom. You can still visit it, since it’s interesting anyway.

This might sound weird to you, but it is the Argentinean reality, it’s very hard to find a stable place.

DB: We just received this email as we speak. It’s from a future collaborator of Labor 3 who is the president of a foundation dedicated to maritime history and archeology.

IK: He thinks this might sound odd, but in fact our situation is pretty similar. We don’t have an office either; we meet at our homes or in a cafe. The magazine is not our main activity; the four of us have jobs that take up most of our time.

DB: Today it’s almost impossible to make a living from an independent cultural project in Argentina.

CC: Yes, and in our case we decided that we didn’t want any kind of advertising. I guess that complicates things a bit, but we avoid any interference.

DB: Thanks to this, we have total freedom and control over the content we publish. We think of ourselves as readers, and we print what we would like to find in a publication.

AS: Dealing with all these difficulties, and not having to respond to any pressure or external requirements, allows us to focus on our own concerns and to work with the people with whom we want. Making a magazine today, with high publishing costs and not having any kind of advertising, is a way of taking a stand.

DB: Featuring a successful artist and an unknown construction worker equally is another way of taking a stand. It’s not an ideological statement, but a matter of interests: one job (and its process) could be as interesting and fascinating as the other. In fact, a lot of artists often tend to repeat their ideas and say expected things.

In an ideal world Labor would be our full time job, but we haven’t found a way to make this happen. Yet.

Labor members alternate this project with their daily work. Irina is a writer and student of Psychology; Coni has a degree in Communication and likes singing; Alan is a filmmaker and artist; and Diego is a graphic designer. The four of them are friends and besides that are couples (Coni & Alan, Irina & Diego). Making the magazine is inseparable from their everyday life. It is a constant work, not limited to a fixed schedule or certain activities.

IK: Labor goes through our daily life, becoming a permanent filter in our way of looking. Situations in our day-to-day lives, people we meet, things we hear, all become starting points for articles.

DB: Especially little things, things that you take for granted and often go unnoticed, and that of course affect everything else. Personally, with Labor, I started to think of work as the purpose of life and not as merely a means of subsistence or a thing we must do in order to get something else.

CC: We are even working on bringing Labor into other formats, by taking its concept and the perspective it gives us and translating it into new projects. I like to think of Labor beyond the object, as an idea.

DB: In this short film we made, three years ago and not knowing what we were doing very well, a voice-over said "We want to make a magazine that leaves an echo in your daily life, an abstract tool for your work, a magazine that makes you want to get up and do something." Something like that is happening.