Diatribes occupy a large chunk of our scope in the living life of this new millennium. In a society transfixed on maintaining a vital root in both the visual and virtual world, rants are gaining power. The effectiveness of “the open letter” can wipe a person’s public image clean. Opinion boards breed without second contemplation at this rate, with the virtual, prose trash-bins dating back to the early stirrings of the Internet. Self-validation is not an illness plaguing the modern world, but a way of being. It is now the modus operandi to garner connections in the technology age, and to gain recognition. It grows more and more difficult to decipher distinct voices in the masses. The leading professionals are beginning to doubt their ability to determine validity, to critique without fear. Incomplete, underdeveloped standards reaping blind acknowledgment grow at an alarming rate. Everyone is an expert and no one is an expert all at the same time. 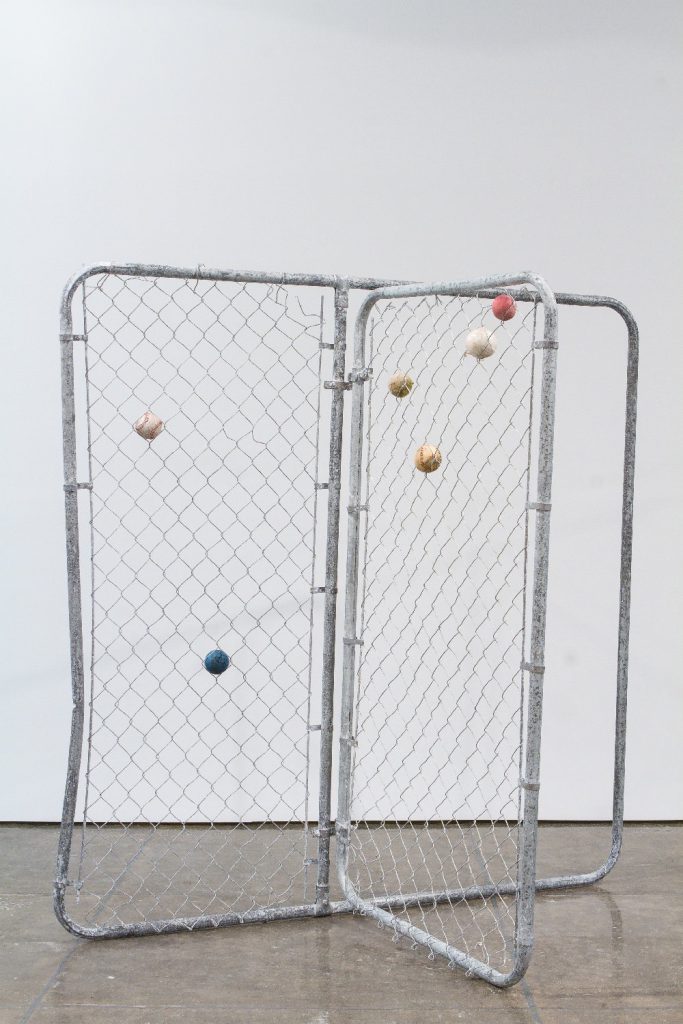 While the art world wages war against the strengthening bond between capitalism and the narrowing creative fields, it is not too hard to identify with Detective “Rust” Cohle as he shoots back jet-black meditations on the crumbling society before him. The television crime drama, True Detective, shines best with this particular character’s cutting discourse and its ability to entice questions. I think it evokes a need within the audience to dissect what is in front of them, as if their senses are always lying. Rust’s disdain, his almost biting disappointment on “the state of things” rings clear in my head whenever I try to look towards the art world. Nepotism and trophy hunting control the art market. The history of art also provides evidence that the systems and infra-structures have not changed much, as if having hope for justice and a level playing field are a thing of daydreams, but then you start to see shimmers of promise: authentic and fiery work created by artists from all demographics. This is the work that makes you challenge your own awareness, your own tilt on materials, process, and troubling thoughts about the art world. Not everyone is trying to push their personal brand to the point that it overshadows their own work. Not every artist is waiting for a flipped art career. Or brand heavy group shows. Or misguided auction nights based on speculation. 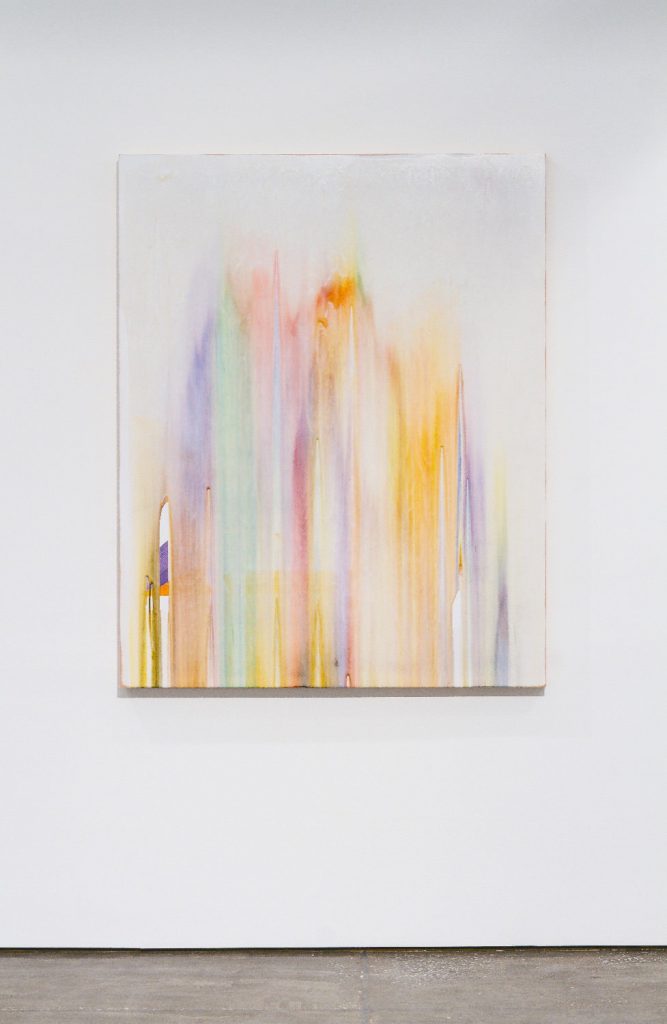 I first met Miami Beach native, New York based artist Evan Robarts during the install of a group show at Ed. Varie in May 2013. Alongside Tyler Healy and Dean Levin, who at the time all shared a studio in the Brooklyn Navy Yards, produced one of the few exhibitions I can still remember every piece from. A practice begun in experimentation then took the extra round to apply their own intimate message to each piece, a procedure forgotten by many hollow artists clinging to un-actualized sketches. Art cannot stop at process, for every artist relies on it in their practice. It cannot be the only justification for a worked out creation. There has to be a little more to it. Not a lot. Just something or why should anyone take note? For me, the show was an inquiry on material and a “course of action,” allowing the viewer to dig further than their accepted usage of particular symbols and “homegrown” materials, one vital angle needed for resourceful transformation.

Evan’s work speaks to a nurtured connection with process and material. While talking with him in his studio preparing for this piece, we both agreed that the talk of “ready-made” goes straight out the window. It’s like stating, out loud, that your work’s influences lie only in Marcel Duchamp. I could jam this piece with Walter Benjamin quotes, art buzzwords and suitable fine art references, but I believe it distracts from understanding and exploring Evan’s work. He dances between various mediums to softly land in sculpture. With his acute manipulation of found objects, he continues to develop into an artist that revels in failure. Robarts does not go down in a fight but lets his materials cultivate and grow with him instead of forcing a happening. His earnest appreciation for uncanny representations and the blue-collar materials he uses in his work allows the pieces to gain natural weight, without the need for theory to help it stand up. 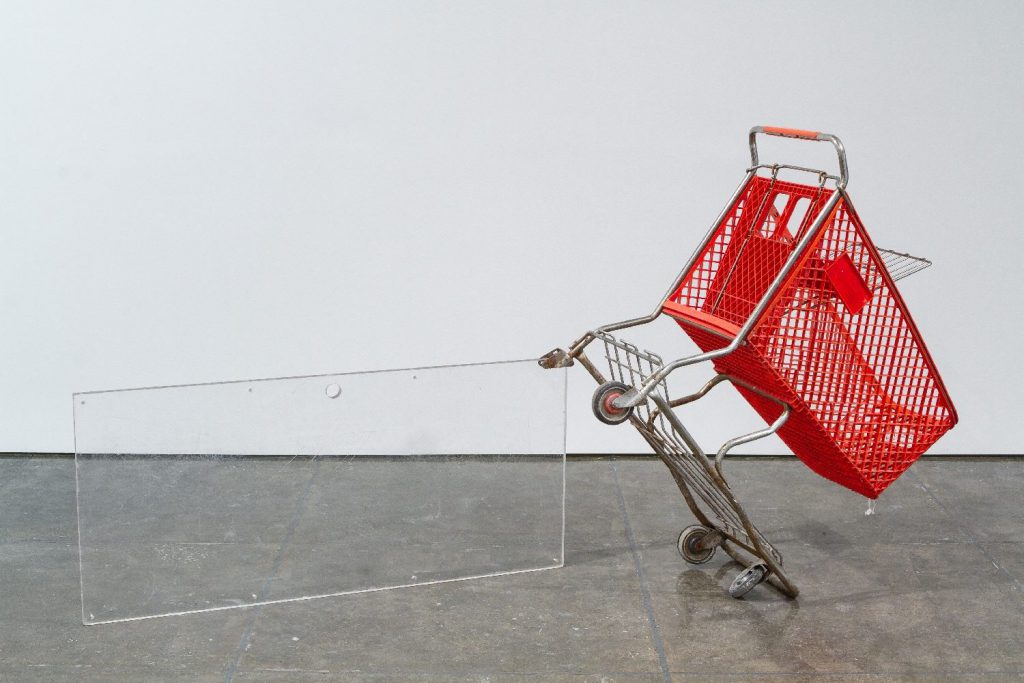 His usage of nostalgia is not a crutch, but another link to a box of questions, inquiries on childhood memories that approach one core principle in art: making audiences aware of what they know and what they didn’t know they already knew. This is a crucial stance in creating multidimensional works and Evan’s art objects, which branch with ease between painting and sculpture, draw from letting his material breathe then interjecting personal influence without breaking the ever elusive equilibrium needed to make pieces vibrate or cry out of stupidity in front of one of Rothko’s color fields. 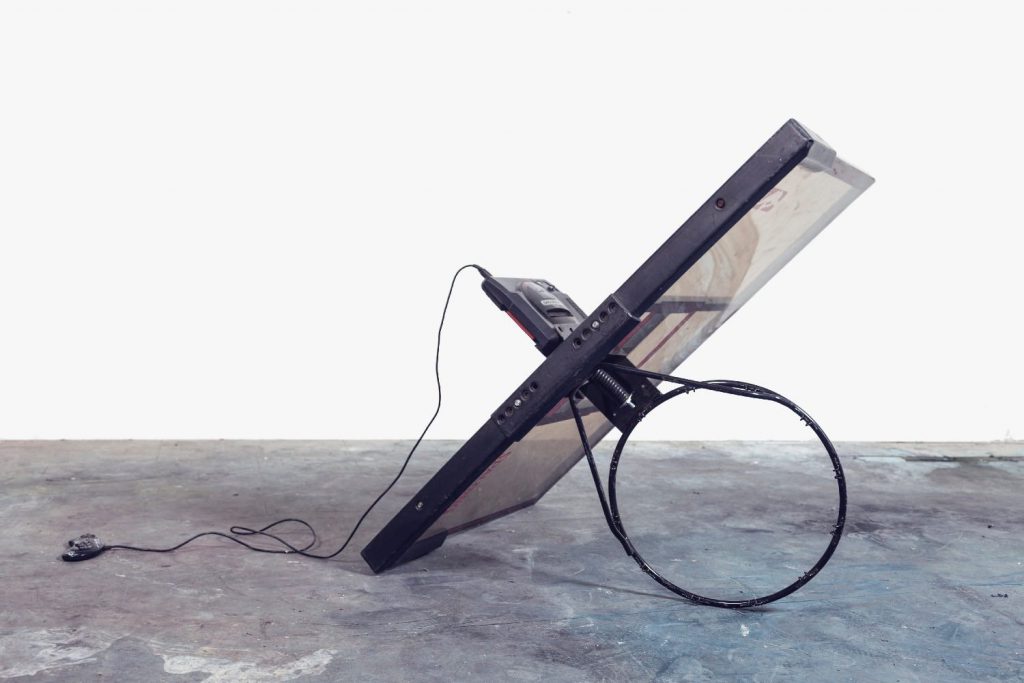 Evan’s work reminds me of the attitude that I am slow in solidifying, but stand by now even in my wee 24 years old on Earth: Sometimes Art just is. I’m not saying Art cannot find support and necessary debates addressed in Western rhetoric like in Freud or Greenberg. I recently got the chance to delve into Susan Sontag’s earlier writing. I now subscribe to her statements on the waves and waves of interpretations eroding contemporary art at a startling rate, eclipsing the primary intentions and diminishing the direction of the long-range discussion. The waters are now murky, making it harder to find ingenuousness and golden statements for progress in a darkening sea of opinions. She also argues that art should exist without context and theory, but that the two were interchangeable now in contemporary language and conventions. Art becomes vague and indistinct with too many implied undertones and exclusive art references that cloud the original “moment” that artists strive for when they create their pieces in the first place. Evan’s art brings a sense of buoyancy, just good vibes. His work leaves you pleased with clever aesthetics while still requiring you to question the arrangement of your accepted notations.

Left to their own devices, some artists will continue to protest the consensus. Intellectuals must sift deeper and remain steadfast in showcasing honest artists and write. Inform. Concoct even when it fails, goes wrong, making mistakes along the way to strike conversation and new manifestations. Without artists like Evan who do not rely on half-baked testing and dogma to spring their work to life, but rather unfeigned metamorphosis, there will be more unwarranted blog posts, there will be more think pieces, ego stroking, and complacency. Artists need to stick to their logic and eagerness when taking the next step, doing it all because it is what they need. Maybe we are all doing it wrong, but some artists and critics are out there creating well-grounded substance by disregarding controlled, trite contemplation for wholehearted freedom, and unabashed evolution from what we know we know. III