Based in Tilburg, in her native Holland, Sigrid Calon’s (1969) visual practice collapses the boundary between fine and applied arts, and serves as an assault upon the inessential existence of a separation between these two fields. Her volume of 120 distinct pattern-like designs To The Extend Of / \ | & opens out the graphic possibilities of aida cloth, a material most commonly associated with arts and crafts. Calon, however, as if with Fibonacci-esque intensity, sees in this basic fabric a wealth of investigative visual potential. By employing these embroidery grids as a basis for her risographed images, she imposes a structure on her process; a sacrifice of linear freedom that consequently and perhaps contradictorily allows for a myriad of experimental opportunity. More specifically, the intricate and yet functional pattern in the structure of this fabric becomes a framework within which an intense experimentation with color occurs. 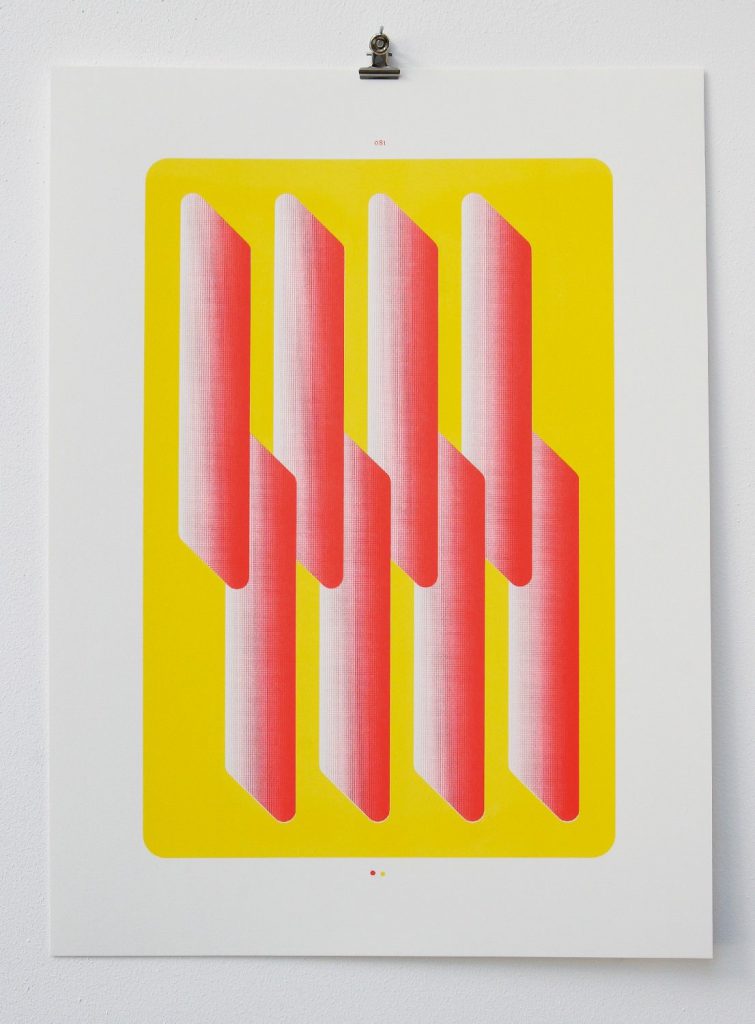 The designs on each page of this book stand monolithic, supported by no text or title, simply a number. Nothing distracts from the powerful image of saturated color, and as a consequence this decision subverts a normative expectation of a publication. Despite its lack of textual content, this book has much to say. Reflecting an inherently human search for order amongst the unfathomable chaos of nature, Calon yearns to seek patterns in the exterior environment that surrounds her. Quoting the biblical creation story as a search for order and the theories of Ancient Greek philosopher and mathematician Pythagoras as a longing for beauty and harmony, Calon draws a parallel with her own desire for these essential qualities. In a similar gesture, while working with manmade material, Calon similarly searches for detail in the minutiae of our exterior surroundings. Calon renders the chaos of our surroundings more structurally comprehensible, and yet still resists reducing its complexity, and in turn that of nature, to anything less staggering.

To create the designs in this hefty publication, Calon initially chose eight colors: pink, blue, orange, brown, yellow, green, black, and red, and combined these to generate 28 two-color combinations, 56 three-color combinations, and 72 four-color combinations. From this abundance, 28 final images exist in the text, and each appears only once. By layering colors over a basic textile arrangement via the repetitive printing process of the risograph machine, Calon imbues her compositions with a depth and volume that vibrates across each page. 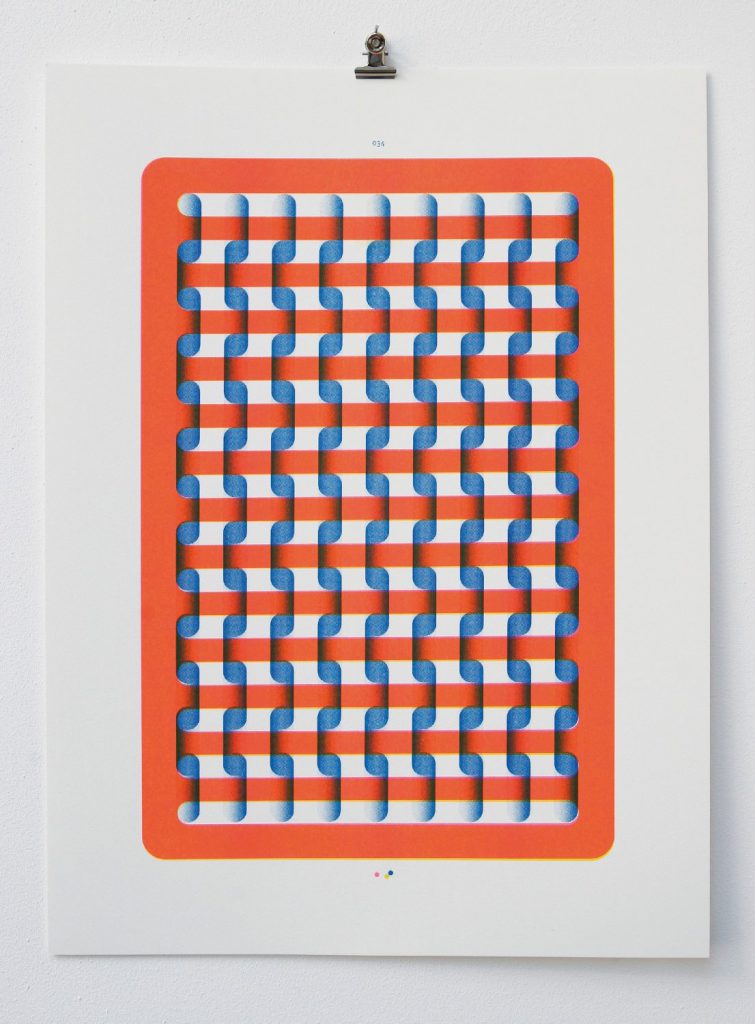 As with her choice of colors, the risograph, which functions as a high-speed digital printing system not dissimilar to the photocopier, equally serves as a limiting system to Calon’s work. The question as to whether these limitations may be unproductive remains. However, this machine affords Calon the opportunity of working in a layered process, where, again, the potential for seemingly innumerable compositions abounds. This technique differs greatly to a more standard printer, where each color is printed simultaneously and the resulting image takes far less time to print. By using a risograph, Calon therefore has no choice but to take her time in image-making, decelerating and methodizing her practice. 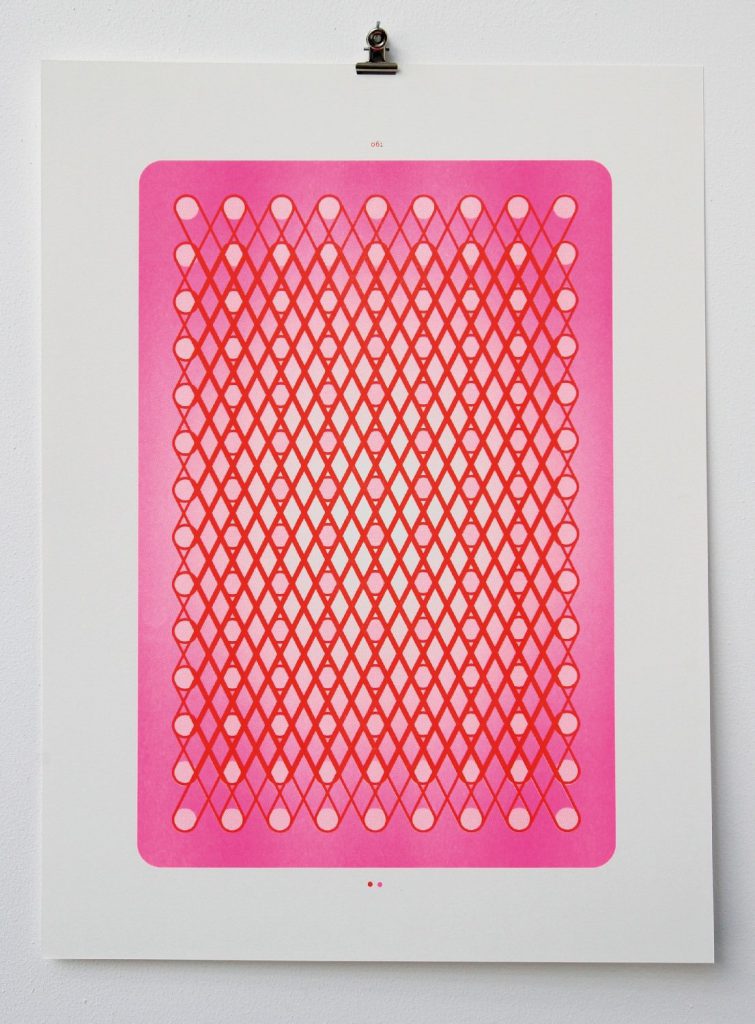 Feeling the rhythm of the risograph as you turn each page, awash with texture despite its two-dimensionality, each image comes alive as it dances in front of the viewer and bounces off the page. While printed, each design displays an utter pulsation of color and together this text becomes an artwork in its own right, a cacophony of succulent compositions. Juxtaposed next to one another, each print would stand strong on the wall, however in the decision to exhibit them page by page, Calon gives the viewer time with her images. The body engages with each design through the necessity to actively turn a page to see what follows. The question as to whether this volume represents an exhibition in book form feels defunct. An alternative imagining for this series might instead be offered in the “artist’s book.” Associated with a high degree of control of the artist from the conception to the production of a publication, these texts are often understood as artworks themselves. Returning to To The Extend Of / \ | & - Calon insists that aside from the binding, the entire book she created herself. From the methodical printing process that came with the risograph to the arrangement and folding of each page, Calon personalizes bookmaking. The book, an object inextricable from its academic associations meets a time-consuming, hand-oriented process that might otherwise align with craft. In this approach, the artist’s work re-engages with this aforementioned idea that fine art and applied art no longer diverge and instead collide to offer a liberating space for creative practice. III 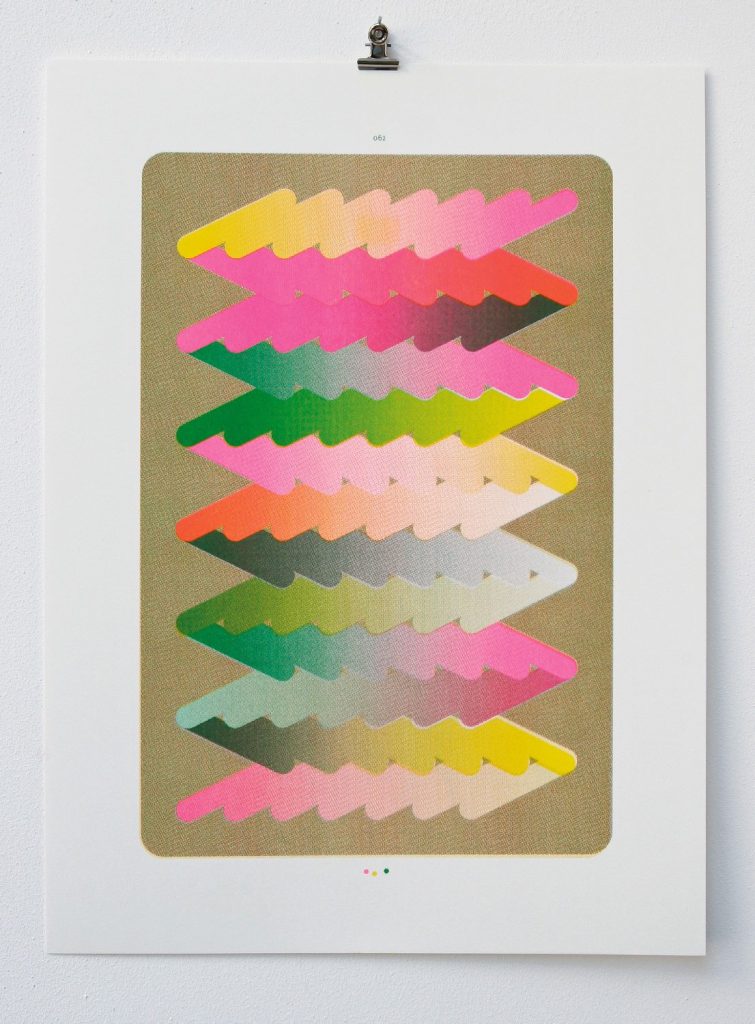 Wayne Liu
"The Thirty Years War, The Meandering Scar, Past Is A Foreign Country"