Some designers are defined by their work, but the aesthetic and spirit of Roberto Piqueras's namesake sportswear line are virtually inseparable from the man himself—Piqueras is his work. Principle. Sincerity. Rebellion that goes beyond yet another exposed editorial nipple and listlessly winding trail of cigarette smoke—are we sure we're still talking about fashion?

Not exactly; while there is no lack of visual interest and ingenuity in the collection, the philosophy and action behind the product—which includes the signature slouched pants, softly billowing draped tees and some amazing sport-gimp facewear options Kanye wishes he invented—bring it all, quite literally, to life. Throw in a few guerilla fashion week presentations, an international customer/fan base of like minds and a collaborative spirit (illustrator Simon Fortin designed three t-shirts and a mask for RP's most recent AW14/15 release) and you have yourself a lifestyle. 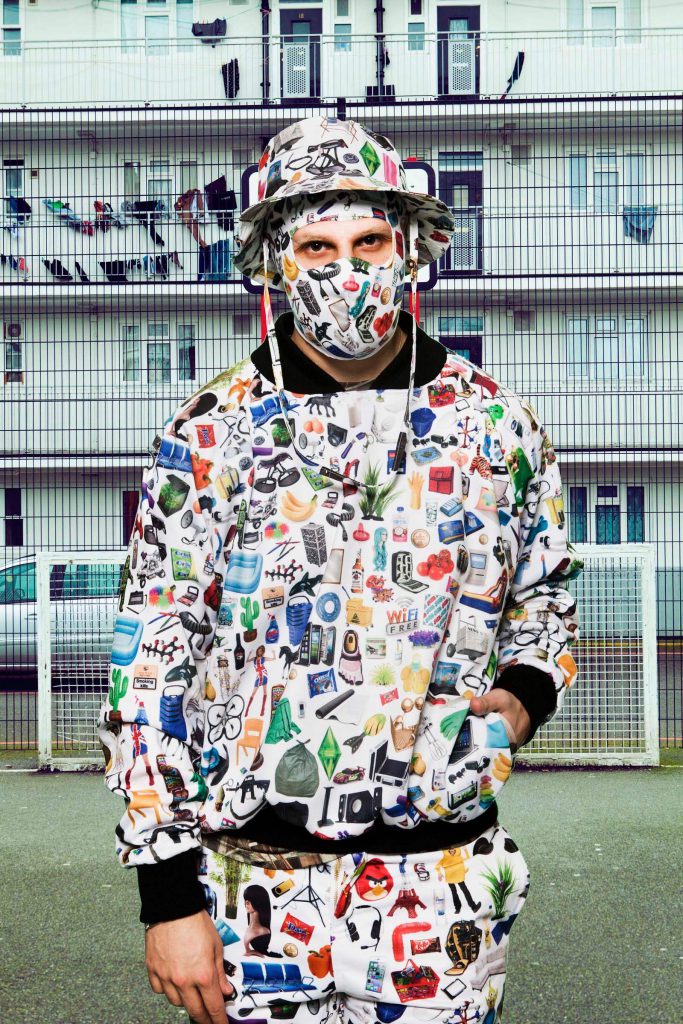 LG: Wonderful to finally chat with the allover prince. You're part of a new guard of internet-driven brands with a decentralized global reach that seems less concerned with the fashion status quo. Your SS14 show was a downloadable .zip file; your AW14/15 show was recently live streamed from Bethnal Green, simply but well choreographed and with little excess crowd in sight, save for children playing nearby. Even your IRL shows are an F-You to IRL; for AW13 you unofficially showed at London Fashion Week by unrolling a lookbook banner and got kicked out by security despite the positive crowd response. Does the traditional fashion industry structure matter anymore? Does IRL even matter anymore?

RP: I finished my school in fashion in 2006, right after a few months working for a leather company; I moved to Madrid and there I tried to work my own brand in a traditional way, with no buyers but a lot of national press media—that means no money and lots of popularity. I was showing my collection at Madrid and Barcelona Fashion Weeks over approximately six seasons, always very connected with the URL network (MySpace and Fotolog). In that moment I was named a 2.0 generation fashion designer. I gave up with the traditional industry, my expenses were much lower and the orders in Asia started growing, so that gave me the idea that something was wrong with what I was doing before. Since then, I started to show my collection in art galleries via video, installation, and photos, sponsored by alcoholic drinks and sport brands. That way to show my work gave a better idea of what RP means, better than an empty, clinical fashion catwalk. That was the moment when RP started to be a brand, and not just a collection. That answers the question of whether IRL matters… and yes, it matters. Internet culture lives connected with street culture; we don't have to forget that.

LG: Any other good renegade fashion show stories? The LFW one delights me to no end.

RP: Yes, I've got many! During my first exhibition in London at Primitive Gallery we were surrounded by police because of a bomb threat just behind the place we were at. The first show I did on the street, for AW12, was really calm; we prepared everything at my place and the public was not that massive. The anecdote came when I uploaded the final group picture on Facebook and it got over 1K likes; in 2011 that kind of success was something for Lady Gaga and Beyoncé.

The rebel movement came when, for SS13, I prepared the models in a hotel and we walked into the British Museum hall with a Facebook event call of 500 people. Security came to me straight away when they saw me screaming at people to stay on the stairs to be able to see the show; all this happened without music or any given notice to the museum, which is one of the biggest and most respected public spaces in UK. They were asking about me when we finished and people started clapping, tourists and guests, but I ran to the hotel with the models and journalists to avoid any trouble. The day after, we were on the cover of VICE with the title "Guerrilla Fashion Show at British Museum."

As I was feeling fashion needed a bit of revolution, I wanted to try for the next season (AW13) to be involved with LFW but they never replied to my emails, so that is when I decided to unroll that real-size lookbook banner in front of Somerset House (where LFW is celebrated). This time they kicked me out, but I already had what I was looking for! Not happy with that, a week later I pasted it on a Brick Lane wall as a street artist but someone who hates me or loves me ripped it off when the glue was still fresh and it's probably decorating his bedroom.

For SS14, I decided to use the street but in a formal way. Filming a short movie and sharing the downloadable file as a mediafire.zip; around 1K people have those files in their computer. The last one for AW14 was streamed live thanks to film director Adrien Le Cavil, with music produced by Melissa Gagne, so as not to lose the same feeling of sharing megabytes of creativity and energy, and to show people that not everything in the industry is money and sponsors. 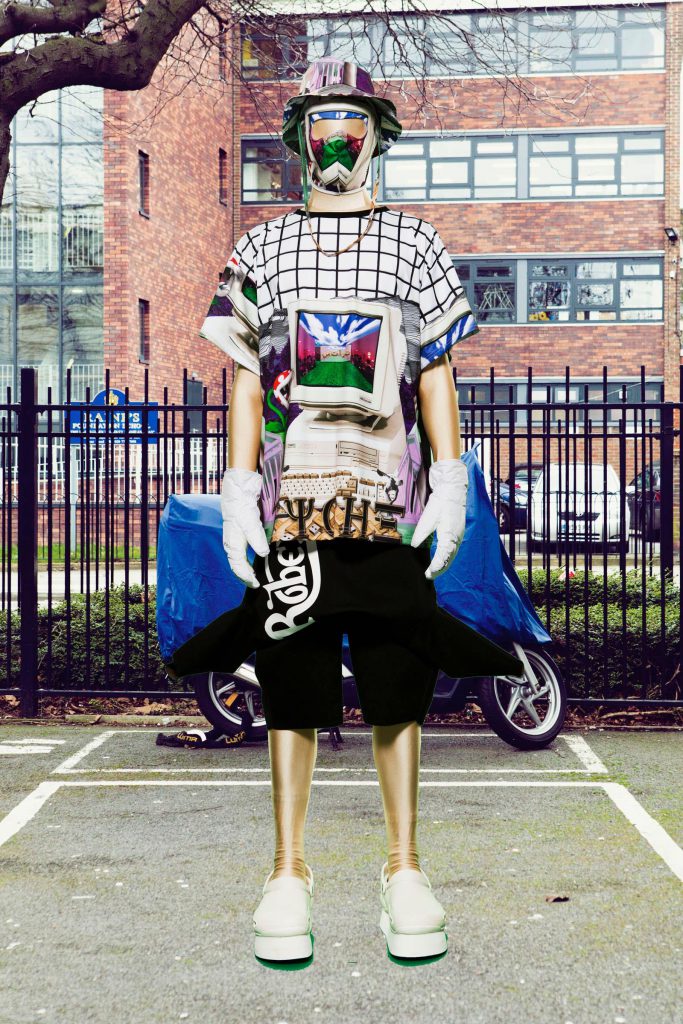 LG: Your clothes are often pegged as having an "internet" sensibility, which is funny because any of us who were alive before and after the dawn of the internet as we know it can see how the sheer FLOOD of information previously unavailable in one place is the defining aesthetic influence of our generation. Do you like or dislike the "internet" label? Why?

RP: I LOVE the internet label. If I had been born 30 years earlier, I would have loved to be associated with movies probably, like Thierry Mugler or Jean Paul Gaultier were. Every generation lives through changes, and those changes define who you are and how you translate that new language into fashion or art.

LG: Do you think it's damaging or positive that visual representations of subcultures are unearthed to the masses before they have a chance to flourish? Nothing stays underground anymore, only caricatured ghosts of what might have come to pass…

RP: This is nothing new and nothing to be worried about, people in the mainstream have always used subcultures' elements to appear new or fresh but eventually they will get bored of it and change. The subculture, however, is not gonna change but will evolve, to go to the next step, and for me that is the interesting part.

For example, I was worried when Jeremy Scott showed AW12 with lots of tumblr inspiration, as if he was a part of that internet generation. I was thinking, "Okay Roberto, go next level" because this is already too mainstream, but when I saw his next season and he was back to all that pop culture, arab, comic sans, I kind of understood how it works. For them, it's just a season; for me it's my life. We grew up that way so I'm not gonna change, but for him it is just a trend, no more care than this. So my message for those subcultures is keep doing it and try to evolve your way of doing things step by step, not because Rihanna goes seapunk. Seapunk is death...

LG: The Roberto Piqueras look—unisex, high impact visuals but low maintenance shapes, often oversized—feels like a direct reflection of you. How much is what you want to wear tied into your designs for the collection?

RP: 100% it's me, my persona and my own experience. I would never design
something I wouldn't wear.

LG: Around what age did you first start owning your look, and experimenting with your own clothes? Who were your early personal style icons?

RP: I think I started to experiment with my clothes and look when I was 10 years old; I had long hair and at the age of 12 I remember asking my mom to dye a piece of hair a pink color, though I think earlier I had a shaved head and a bleached pigtail. The clothes I started a bit later, because I was obese till the age of 15, but before I was always customizing my plain white/black t-shirts and doing my bell pants bigger with extra pieces of fabric in a triangle shape. My early personal style icons were Aqua, No Doubt, Alanis Morissette, and Spice Girls. 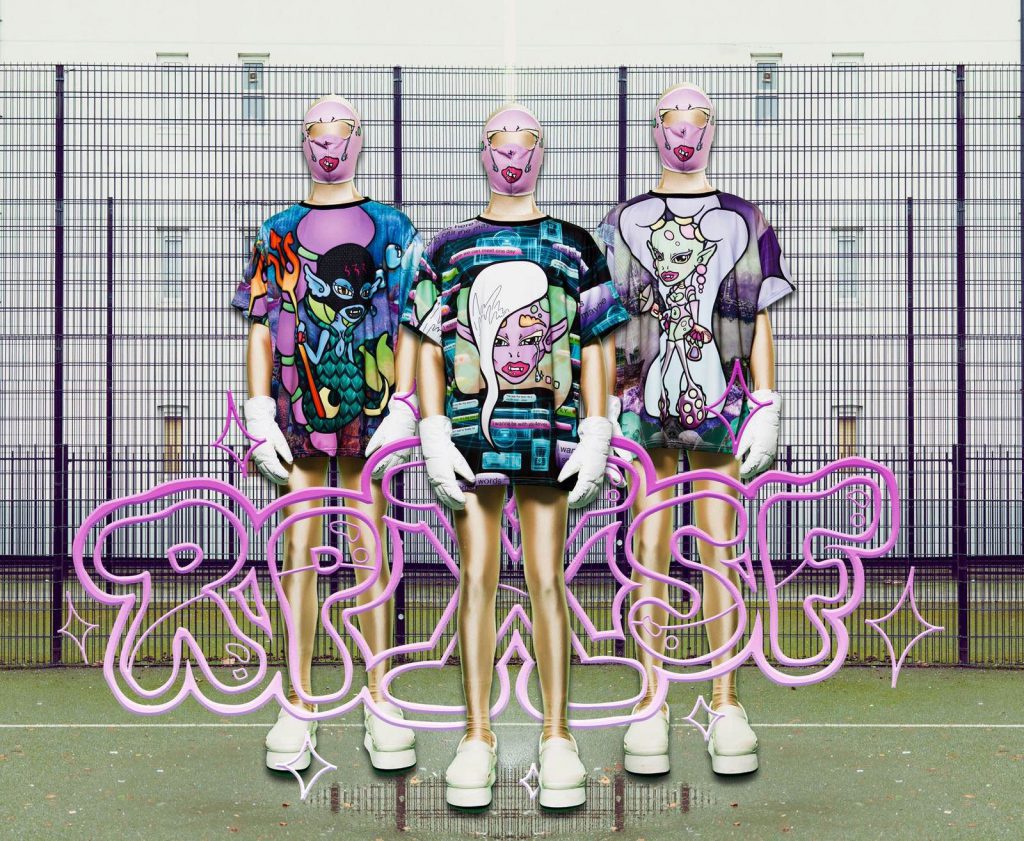 LG: Were you always a designer at heart, or did the desire to create clothes others could wear come later?

RP: In my mind I thought I was more of a stylist, but when I finished my studies I knew I wanted to make clothes and see others people wearing them. I
remember selling my first designs before I finished school in a shop in Barcelona, and lots of local go-go dancers were asking for them.

LG: You lived in Barcelona/showed in Madrid before moving to the UK. Did the streets always inform your design influence? What are some of the main cultural differences between Spain and London, where you currently reside?

RP: It is not that much difference, because chavs are kind of similar everywhere, always loving the excess, gold, tuning cars... that's the definition of the neighborhood where I grew up. Since I moved out of my parents', I always lived in the muslim part of the city; in Barcelona it was Raval, Madrid was Tirso de Molina/Lavapies, and I'm currently based in East London, Bethnal Green. That's why I mix the arab costume with sportswear as a part of my label. If I grew up in the Jewish community, I probably would have gotten the inspiration from there—I just need to live it in the first person.

LG: You said in a previous interview that your move to London and the first six months you were there were the result of a prize from Burger King won at Madrid Fashion week. This is the stuff that memes are made of—how does it make you feel that an undeniably corporate entity assisted you in obtaining the artistic freedom you so deserve?

RP: It makes me feel ashamed of my country, because it should be them who help us to grow and not a fast food private corporation. But they were just a piece of that freedom, they had tried seasons before with other designers and it didn't work. They gave me the money, but did not help me at all to find buyers, or ideas to promote the brand in an international way. That's why I see always people spending money and not doing any business. 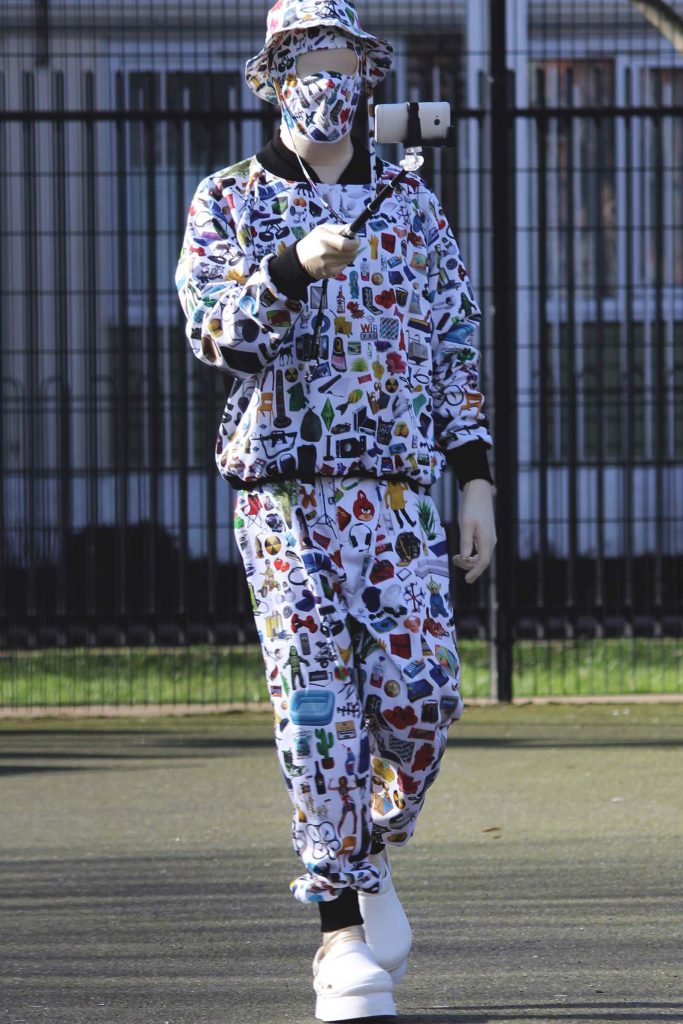 LG: Between this and the McDonald's-inspired Moschino collection, do you foresee "frypunk" becoming a relevant fashion trend? Perhaps "mcnuggetcore"?

RP: For me, I see more a "googlefashionweek" or "appledesigns by Roberto Piqueras."

LG: If you could wave a magic wand and make any style of look widespread on a mainstream level, what would the former basics of the world wake up wearing?

LG: What is the best thing about having a clothing label in 2014? The worst thing?

RP: The best thing is that I've got a new wardrobe every season. The worst is
that everyone thinks they can judge your work by having a blog.

LG: If you had to design an entire Piqueras season using all white, no prints, how would it change your silhouettes?

RP: Probably I would create prints using different-shaped textured fabrics, all white on white. "Hypersensitive" is the new Roberto Piqueras. 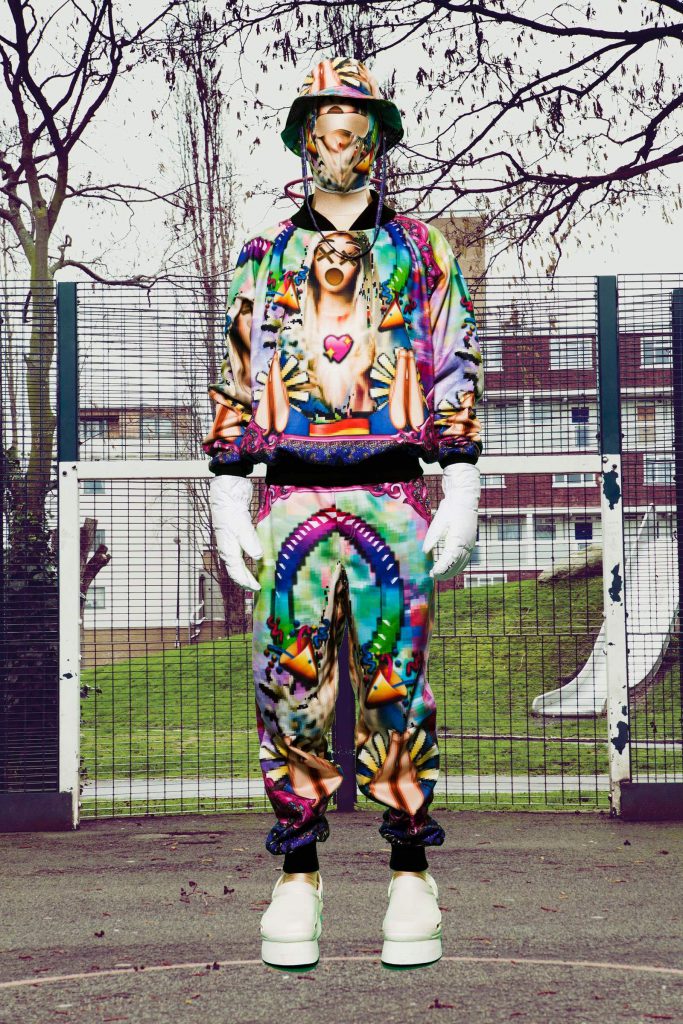 Destroy All Movies
"The Complete Guide to Punks on Film"