“Spirits eat—just like us” –John Little Finger
Nineteen-year-old Bert Lee sits in the shade of a tree in Yo Park. Cassandra Warrior feeds her daughter, Diamond Rose. Daniel Runs Close sweats under the sun at Wounded Knee Memorial site. Kassel Sky Little puts his boots on at the Waters Rodeo. Vanessa Piper is alone in the middle of Badlands. Lance Red Cloud hangs out behind the gas station at night. It is summer and they all live here, at the Pine Ridge Reservation in South Dakota, USA. 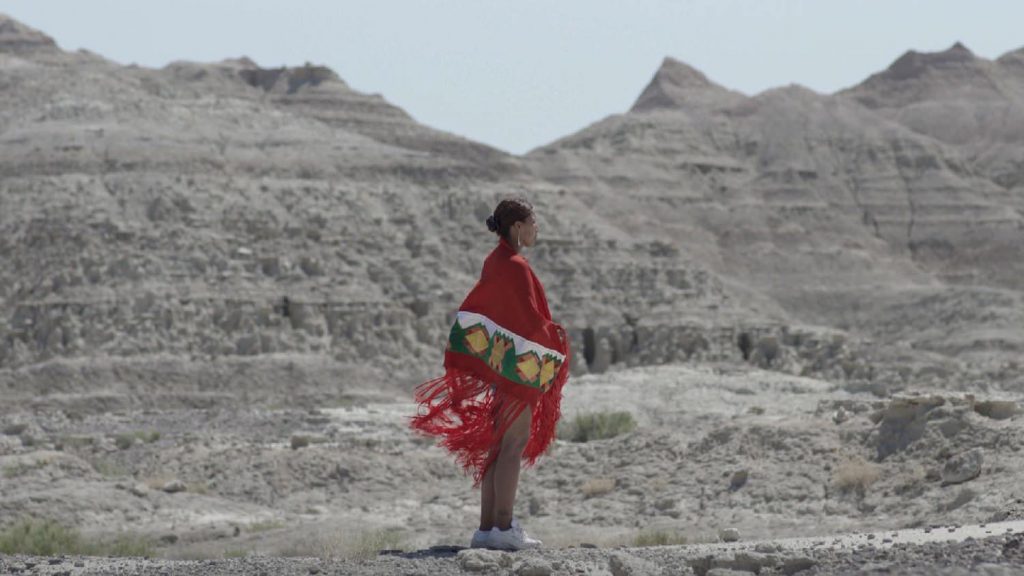 What question, if answered, could make the most difference to the future of Bert Lee, Cassandra Warrior, Daniel Run Close, Kassel Sky Little, Vanessa Piper and Lance Red Cloud, all living adrift at the "Rez" of Pine Ridge, one of the poorest parts of the U. S., the home of the tens of thousands of Oglala Sioux? This we ask from Anna Eborn, a Swedish-born young director, whose debut is the feature-length documentary PINE RIDGE, developed and shot in three visits in 2011 and 2012 at the Native American reservation.

TS: What is it that we are not seeing?

Every scene or every combination of images in the film is there because I wanted you to see and experience them in this particular cinematic order. What lies beyond these images, what is absent in the film, but might be present in reality, is there as only indications or directions for you to reflect on what you see.  I could argue that I was hoping that the film would incite the audience to ask a question like yours. What I mean is that I do not make cinema to give straight answers, nor to explain the world. I film and edit moments of real time and, with the help of cinema, I create a separate universe where a selection of takes and this unique structure rules. The reality outside of the film may speak another kind truth—one where, for sure, a far more complex world is present. Maybe my film asks you to reflect upon the structure of the world around you, upon the consequences of history.

I often think that if I deliberately extract something obvious or something very violent from a film reality, it will somehow shine through; and because I believe in the creative and intelligent mind of the audience, I can insist that you feel what you don’t see.

TS: And if we assume there is necessity and possibility, urgency even, for a better future for the youth of Pine Ridge, did you see anything there holding-out the promise of a solution?

AE: People are the way they are, and live the way they live, as a natural reaction to the world that has surrounded them. People are like plants with root—sensitive to the environment. If there is a need for water, or love, we will stretch and bend our mind and bodies until we reach it, because we have a will and the instinct to want to survive. And we all live with the consequences of the actions made by the generations before us. But aside from plants, each human being owns the feeling of empathy, and this is the reason why telling each other stories makes sense to us. It enriches our lives and gives us meaning and connects us to each other.

TS: “The solution” you speak of is, then, of a political kind. And if there is a humanistic solution in this modern world it should, at least, be idealistic, not a burden for the young people to solve alone, but a weight lifted from their shoulders with the help of the responsible surrounding society.

AE: From my experience the United States does not offer security to many of its citizens, and there is a very striking unequal spread of goods and benefits to the different states and areas, depending on what “kind” of people inhabit or have historically inhabited these areas. I mean, every man or woman needs a job to survive. And the fact is, in Pine Ridge there are none.  I was attracted to Pine ridge because of the landscape. Maybe the open plains reminded me of the open ocean around the island where I grew up. It is obvious that you long to get away when it is hard to leave—but then, once you left, it is so easy to return and nothing seems to have changed while you’ve been gone.

TS: What emotion is your motivator when seeking a subject for your films in general? And what individual emotion or disposition struck a responsive chord with you when developing Pine Ridge?

AE: I like places where nature plays an important and inspiring role in the mise-en-scène. In Pine Ridge, this was the case, on a historical level, political level and—most importantly—in the now, and in the landscape, air and weather.  The themes in my own life have been family, grief, longing, loneliness. I look for emotions and sensitivity in the characters and in the landscape. And I am attracted to characters who have a certain strength in his or her personality, who seem to have secrets or strong dreams. Since I work with cinema, the gaze of people or the visual feel of certain landscapes play an important role in my storytelling. Another theme that usually occupies me is age. Youth or old age doesn’t matter—growing up or growing old can be equally interesting for me, as can themes concerning god. I like the sound of trees, wind, footsteps, and voices—all of these are “emotion triggers” for me.

TS: Any “fakery in allegiance to the truth” (as Henry Luce, the head of Time Magazine, described certain staging in journalism) in your methods?

AE: I think not. But no, there are no reenactments in my film, and every scene—every image and sound seen or heard in the film—was recorded on location in Pine Ridge. Early in the making of this film, I decided that the words of my characters should function as the truth. I never wrote what they should tell me. I sometimes will interview the same person once or twice, but I never recorded anything new after leaving Pine Ridge. I edit what I capture and edit what they told me. for me, the research and the shooting are one. I continue to research until the last day of shooting. Throughout the whole process, until the final edit, I try to be as open as possible and put all my attention into the film itself and how it develops. Did that answer your question?

TS: Yes it did indeed! In this world ink costs more than human blood! But, jokes aside, you also told me that you usually only film people you really like. And that you have great respect for everyone who appears in your film. I feel that your choice of characters will depict a certain outcome. But did it ever get dangerous?

AE: I need a kind of like or respect between me and that person to be able to stay longer. The people in my film are pretty brave and strong, and that’s why I wanted to work with them. And I wanted to make the film I had never seen. I have seen the all-American youth a thousand times in documentary, fiction—but it’s never captured here, never at a reservation, and not in the way I wanted to make it. My focus was never on the stuff you hear on TV, or the more historical documentaries people have made in this area before.

So, my choice of characters has to do with what I want to show, and who interests me. There were a lot of situations, images that I never filmed, because I didn’t think they fit the film. I wouldn’t say that things got dangerous but, sure, a little out of hand at times—but nothing happened to me or my cinematographer. I mean, there was a lot of shit going down around us, but in that sense, we were really outsiders and not part of the conflict.  What could have ended bad for us was a tornado drive-through that happened one night. We had just picked up a soaked woman on the side of the road and then ran over a huge eagle. But with the guys I was filming, I always felt they had our back if trouble came walking in. or, if our car broke down, some of the guys would come to help us out. People tend to warn me or tell me—do this, don’t do that—only at one time, the warning was so striking, like, he said it like he meant it, and I took his word not to go with him that day.

AE: I feel like you have more freedom with documentary in the way the film is (supposed to) be developed. Film institutes are not so eager for fiction films without regular narration. In the documentary world it’s better—and what I am doing is closer to documentary than fiction, I think. But I really have one foot in each grave. I can’t say I prefer one or the other. I prefer to call what I do “film” or “cinema," that’s what I strive to make.

AE: Well, right now I am editing a short documentary that I shot in November when I revisited a village in Ukraine (where I previously made a short film four years ago). But the next feature film is a fiction, and it's a collaboration between me and Oscar Ruiz Navia; a director from Colombia. The title of our film is Epifania, where the memories of our mothers intervene into a film about regaining life. The shooting starts in Colombia in June this summer.

TS: Listen, Anna, tell me what you ache for? And what’s the biggest thing you’ve been wrong about? Or can you say what is unnameable?

AE: Can I answer LOVE to all three questions?! I am a very emotional person... no, but for real, aside from my personal love life being that of a tumbleweed, love in its true meaning is the biggest accelerator for my creative work. We are here to inspire, to get inspired, to put questions in other people’s head, to strengthen, to give, to see, to listen to each other. Sounds like hippie talk but, for real, today I read yet another hate crime story from Russia, and I really feel we need a new summer of love—or at least to believe in one.

TS: When is the best time to do each thing?

AE: In the moment when it feels right.

TS: Who are the most important people to work with?

AE: People who inspire you.

TS: What is the most important thing to do at all time?

AE: Be receptive in the moment. Pay attention. III

MEGAFORCE
"From Paris with love"