Roosmarijn Pallandt (The Netherlands) works with weavers and craftspeople spread over all continents to create a series of hand-made carpets based on aerial landscape images. Her hybrid art-design-research project, Imagine Nature, explores the aesthetic intersection of geography and culture by moving between the habitual view of detail to the grand human dimension of structure. Imagine Nature is a investigation born out of curiosity, resulting in a series of textiles as well as a database of quantitative and qualitative information.

Playing upon a line in Lewis Carrol's oneiric adventure, Alice in Wonderland, that asks what good a book is without any pictures, we engage the artist in an unorthodox interview process wherein images are the focal point of a conversation. After jointly selecting a set of photos that reveal the process rather than just the final works, each image is taken as a point of departure for a single question-answer exchange between interviewer and artist.
The idea is to dig deeper into Pallandt's ethical and processual motivations and stances. Collaborative community work, especially when initiated by the Other, requires a commitment to and tenderness for (subaltern) foreign cultures. Social practice should be, in its ideal incarnation, a two-way conversation and not a unilateral imposition, an observation in light of which Pallandt's field methods are particularly insightful. Laid bare in an album of informal research images, the social constellation of Imagine Nature emerges in casual conversation.

CB: In this interview process, why is it important to publish the research and process photos, as opposed to just the rug & map diptychs?

RP: These carpets are the final results and tactile products of the investigation that drove me into the project. The core of the project is found in the curious investigation: How does the landscape we inhabit influence our sense of being as well as our eye on aesthetics and perception of form? Views on nature are deeply connected to our spiritual, philosophical, literary and emotional experience of the world -- also to the question of our identity. Nature and landscape are an endless inspiration and source of knowledge for and in our culture. Cultural works are decodable and have meaning in many ways. I chose to work with textile as I think it reflects beautifully on cultural heritage as well as the tactility and meaning of the product. An object cannot compete with an experience.

CB: How many different fibres went into this rug?

RP: Two ramie, jute, cotton, wool, silk, hemp, banana, linen. We mixed some of the threads to create a greater variety of textures.

CB: Why did you choose to eliminate color and go for white on white?

RP: To take away color is to simultaneously reflect on form and cultural heritage through the availability and shaping of local materials. Also, monochrome further emphasizes the individual perception of the landscape in the craftsmen’s translation.

CB: How do you select the weaving communities with whom you collaborate?

RP: I chose the communities based on my expertise; out of interest; or depending on our communication. I worked with communities that liked the project as an artistic collaboration, and were also able to make and transport a carpet of a large size (if you were to carry a 16 square meter carpet on a donkey, it would be hard for the donkey). Regional differences also allow a productive tension between local and global forms. I thought it would be most interesting to bring the project to all five continents, to remain aware of how arts and craft function at a global level yet also with an eye on local conditions, such as local materials and craft traditions.

CB: Can you tell us about the process of selecting particular landscapes?

RP: I think of landscapes in a range of scales, from the human scale of detail to the grand scale of structure. The grand scale of the global reach adds to the selection process as we encounter unknown lands through new medium. My image search actually started with aerial photography from a kite in Portugal and with a fishing rod in Iran, then eventually I made my way to Google Earth images. On the one hand, the choice of landscapes is largely determined by the habitat of the communities I visit, and then by their specific choice of a magnified feature of the landscape. Each group of craftsmen chose one “known” image out of the landscape they inhabit. In Iran, the nomads chose their vast deserts. The Tibetan weavers chose one of their glaciers. On the other hand, I asked each community to interpret a second “unknown” landscape: a white sand desert in New Mexico. I gave the same image of the foreign desert to all the makers. None of them had any relationship to the endless sand dunes. This unknown territory was added to deepen the research and find out how nature influences culture-- posing the challenge of representing something they are unfamiliar with. 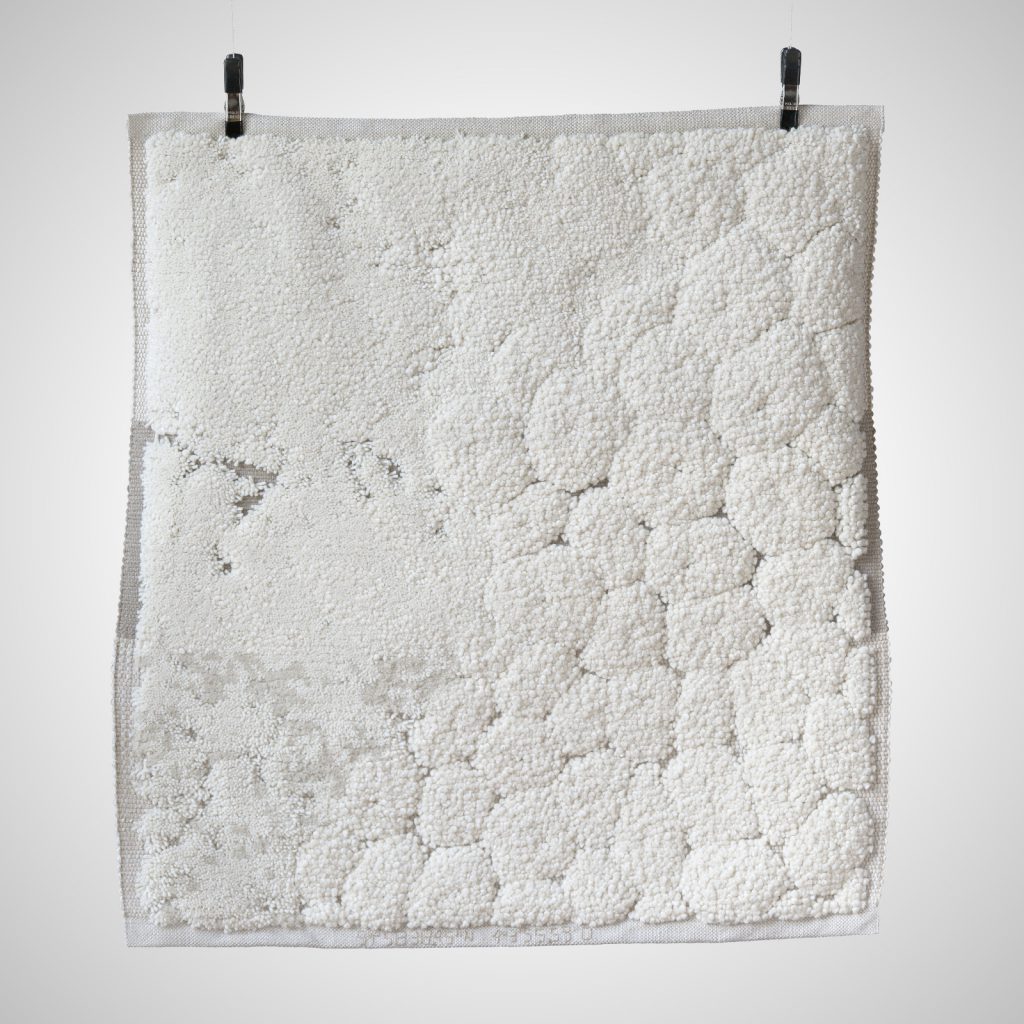 CB: This project straddles the fields of art, design and social practice. Has this hybrid approach helped or hindered its success?

RP: For me, hovering between art, design, anthropology and science is the most natural way of working. I think we live in a time when those boundaries dissolve, making cross-sector collaboration a necessity. Our nature can be objectified in science, but myths, stories and languages also play an important role in our awareness. That being said, the fact that I as a maker, do not ostensibly work from one single field makes it very difficult to get funding for this project.

CB: As an outsider to each new community, how do you address the issue of not parachuting into their world and imposing a Western / Northern / Other idea structure?

RP: This is a good question and I do find it difficult to tell you whether I do or do not project my cultural background or my ego too much through the process of working. Traveling and collaborating with various craftsmen across the globe taught me that I carry a heavy burden on my shoulders. The need to be special, to think, do, or behave differently, to find the new, to address the old, etc… Many of the craftspeople work for the community instead of the “self”. They are driven by a knowhow and knowledge that are centuries old and secretly passed down to them. Like meditating, they simply do what they do, and are proud to carry on using techniques that have withstood the wheel of time. I am who I am—an artist/designer brought up in one of the most man-made landscapes—who travelled a long way to work with them. I do interact and share my vision, though I cannot be sure whether I am right or wrong in doing so.

CB: How did cottage industry weavers, like the one you worked with in Iran, respond to your unusual request to abstract the weaving process into a set of critical aesthetic parameters?

RP: The response varies per maker, but there are general cultural distinctions. In Iran, the craftsmen are very proud of their creative eye whereas in Portugal the women I worked with showed much interest in learning something new and borrowing ideas and materials from far-flung countries. In Tibet, the weavers wanted to learn about my motives in doing this project before finding their own vision on how and why they would answer my request. In Thailand, art is business, time and money. I learned much from them regarding cross-cultural collaboration.

CB: Why is the water red in this photograph?

RP: Because there are one billion tiny red Iranian shrimps that inhabit the waters.

CB: Why is there wool wrapped around the handles of these scissors?

RP: In Japan, they adjust the tools to fit their hands. The tool and one’s interaction with it is most important. The craft of carpet making was flown in by the Chinese and carefully copied by the Japanese. The tools they use however are Japan-(hand)made, which significantly shapes the designs they can produce. The pre- and post-crafting of fibres is so careful and precise. I haven't seen a mix of state-of-the-art and patience like this in any other place.

CB: Why did you send so many research photos from Japan?

RP: Maybe because it is the country I am working with at this moment, the most recent and yet unfinished in research and collaboration. The further in time this project progresses, the more pieces fall together, and Japan is adding to the project in many different ways. Japan crosses numerous climate zones from north to south; perhaps this is why the native craft has such a large variety of textiles. Their lack of space to play — land to inhabit — does such limitation relate to the cultivation of what there is to play with? Or to how the arts there are more applied than in the West, where we have a large space for free art? I have read on the subject of Satoyama (border zone between mountain slopes and the liveable foothill of the mountain), and I am busy with this question. In Japan the soul of the rocks, trees, rivers, animals, places and the people are not separate. They exist within the same world and share its interrelated complexity. This entwines with my interest in how we experience and want to be with nature.

CB: The factory you worked with in Japan seems to have the capability to mass-produce rugs, but you mentioned in another conversation that creating livelihood is not particularly the goal of your project. Was this a strategy for managing the expectations of communities, in relation to the project’s relevance or contribution to their practice?

RP: At first, it seems like a mass production-focused workplace. They do produce a large and uniform variety of handmade and crafted carpets. Next to this and every year, they make a new carpet for the Japanese emperor that he and his wife come to choose. This is a huge event. I do not limit myself to tribes or far flung places. It is in the reality of the production that I find interest. May it be factories, traveling nomads, local sheep yarns, plant yarns or imported yarns that flew in from miles away and have been made their own.

CB: What kind of dimension did the language barrier, or the element of mistranslation in the process of communicating instructions, add to the finished works, if any?

RP: One can imagine that from the differences of language, habits and ways of communication, results can arise that are surprisingly funny, strange, different, ugly and beautiful. Maybe the language barrier adds something. Who knows? It might even be for the better that I take three jumps in explaining myself either through the translator, the interpretation of body language, or the “newness” in the way of working.

CB: How did each culture’s approach to temporality differ and manifest in the weaving process?

What matters to Printed Matter